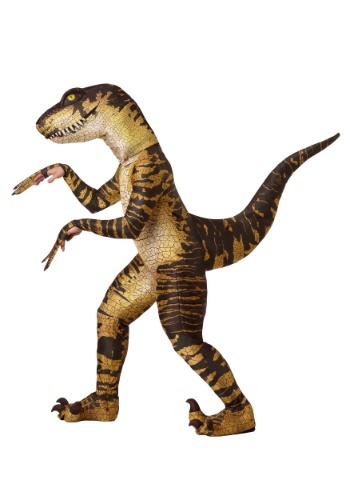 Spending a little time hunting in the woods? Yeah, we feel ya. And we might even call you clever. Because you're not tromping around the woods of your little neighborhood. Nope! You're back in time, all the way back to the Jurassic period. And you're hunting in a pack as a fearsome Velociraptor. Well, at least that's what it's going to feel like when you get this Raptor Costume!

This Raptor Costume is so lifelike, that we're sure all the neighborhood kids are going to think you're the real deal. And that's kind of the point, isn't it? It's not like anyone's going to bringing back the dinosaurs anytime soon, so we might as well do what we can to bring the dinos back to life. And this costume is a great first step!

This adult velociraptor costume will have you standing out amongst all the other dinosaur costumes to be found this Halloween. And that's because it's made and designed by us! We like to put a little extra love into our Made by Us costumes, and in this case, that'd be in the details! The detailed graphic print featured on this costume was made in-house by our graphic design team and it looks simply stunning when seen for the first time. It truly has a style that's above and beyond any dinosaur costume you've seen before! Including the jumpsuit, headpiece, gloves, and footcovers as separate pieces, this costume has everything you'll need to go full dino.

When Dinosaurs ruled the earth

Even though they’re mighty carnivores and fearsome predators, there’s no two ways about it, we think velociraptors are the tops! We’re your top costume spot to shop for costumes, so it’s only fitting that we’d have the coolest dinosaur costumes to be found. So, suit up with this velociraptor costume, and get ready to roar!