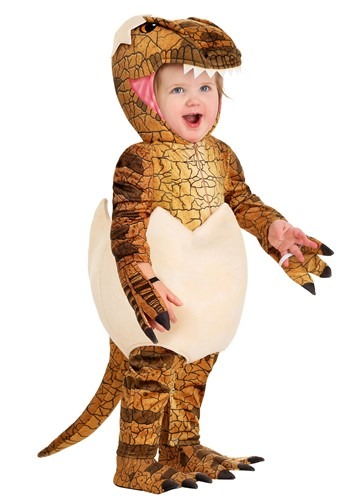 So, say hypothetically, you popped open the gull-wing doors on your time cruiser after punching 80 million years ago into your time circuits. You'd be staring straight at the Cretaceous landscape. Think you'd have the guts to go exploring? You might venture into the woods in search of dinosaurs, and stumble across something unexpected but not entirely too surprising. A dinosaur nest!

You might see some eggs cracking and maybe even baby dinosaurs hatching. But be careful. Do you recognize the species? They're baby velociraptors! They may be super adorable, but you better watch out! Momma can't be too far away. Not to mention her hunting partners! We, actually, have a much safer way to play out this scenario. And it won't even require a time machine. Just suit your infant up in this Baby Velociraptor costume, and you'll have a cuddly little raptor you can snuggle up to. And, with virtually no chance of velociraptors swooping in and ruining the fun!

One of the cutest creations in our Made by Us costume line, this Baby Velociraptor Costume is a fun creation inspired by prehistoric exploring or the idea of scientists using ancient DNA to craft dinosaurs in a lab. The costume comes with a hooded jumpsuit that features attached mitts, along with a foam "eggshell" piece and ankle cuff booties. Each piece is expertly crafted with a detailed graphic print and easy-wear design features like a zip-up front and snap access for diaper changing.

Dinosaurs are always a prime theme for Halloween, confirmed by costume fans around the world. So, we say, get dinosaur costumes for your entire family this year! Our exclusively designed dinosaur styles are unlike anything else offered, and that's because we put a ton of attention into getting each and every design detail just right. Pick up this Infant Velociraptor Costume for your tot, and then think about getting the rest of your family into dinosaur costumes or even scientist or time traveler costumes!