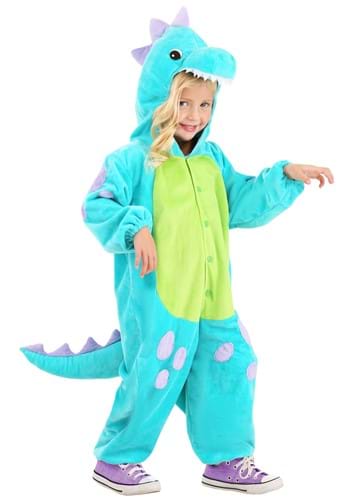 Many kids become obsessed with (or at least interested in) dinosaurs at some point in their childhoods. Perhaps you were one of them! It seems like these kids can name dozens of species at the drop of a hat and are always holding out hope that the cool rock they found might actually be a fossil. If they talk about these cool creatures around you enough, or you just remember some facts from your own days of interest, you might recognize species names like tyrannosaurus rex, pterodactyl, stegosaurus, and brontosaurus. Well, we’re proud to say we’ve done our own digging and discovered one you’ve probably never heard of! The rare cuddlesaur was known for having neither scales nor feathers, but fur instead. It didn’t hunt other animals or eat a lot of plants, since its preferred meal was Halloween candy. If your child is thinking about dressing up as a dinosaur, we think you both should consider the cuddlesaur!

Our team of designers worked closely with our research team to reconstruct this amazing creature as accurately as we could. We think this Toddler Teal Cuddlesaur Costume is a pretty fair representation of what this ancient animal would have looked like. We’ve recreated its brightly colored fur as a cozy jumpsuit that snaps up the front. The green tummy panel, purple spots, and back spikes were color-matched as closely as possible for maximum authenticity. We did include one feature that the original animal did not have, however. The tail on this costume can detach in case your child needs to sit and rest for a while. And unlike a reptile, the tail won’t have to grow back if it comes off--simply reattach it and continue hunting for candy!

Our research has confirmed it—there was no dinosaur that was cuter than the cuddlesaur! If your child wants to dress up as a not-so-scary dinosaur, you’ll both love this Teal Cuddlesaur Costume for Toddlers. We know you'll have the raddest reptile we’ve ever seen!