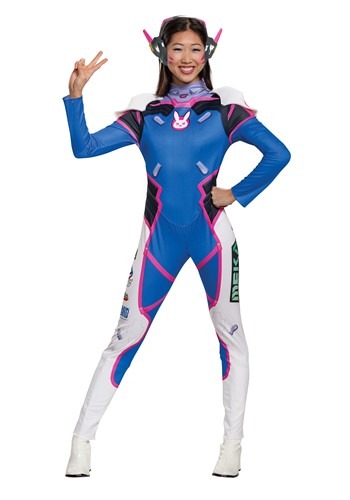 It takes all kinds. You might not think that a pro gamer belongs on the battlefield. After all, the battlefield is full of boinic commandos, war veterans, and even scary-looking robot who's armed to the teeth! How can a pro gamer compete with that? Well, it turns out that the lightning-quick reflexes and the flash decision-making skills required for pro gaming are exactly the sort of skills needed to be a mech pilot. That's why D.Va is a force to be reckoned with on the battlefield!

Do you have some ace gaming skills? Maybe you've got what it takes to be a mech pilot, just like D.Va! All you need is the will to defend your home, an awesome outfit, and a mech. We specialize in costumes, so we can help you with that outfit if you can scrounge up a mech!

This Overwatch D.Va Deluxe Costume brings you a look straight from Overwatch! It's officially licensed an starts with a full-body jumpsuit, just like the one worn by Hana Song herself. It even features printed details all over, including the bunny logo on the chest, the MEKA logo on the legs, along with printed armor along the front and back! It also comes with various logos printed on the other leg. The shoulder pads are attached to the suit and create a lightly armored look. Finally, the included headband fits around your forehead and looks just like D.Va's headset.

We're not exactly sure how you can get your hands on a hi-tech mech! You might have to take a few engineering classes in order to get one up and running for yourself, but at least you'll have a great outfit and the play-to-win sort of attitude to make you a force to be reckoned with, just like D.Va from Overwatch.