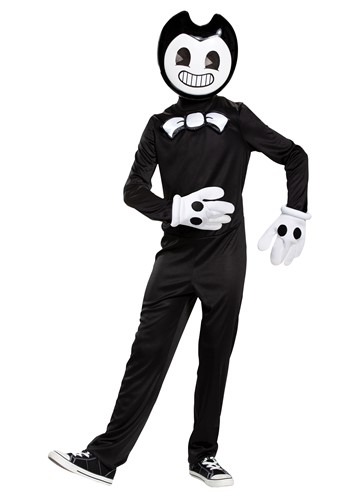 A squeaky door. Dark, deserted hallways. Cartoon giggles heard at a distance. It may not be a classic horror film, but the vibe is the same. Vintage black and white cartoons with demonic intentions lurk around corners, waiting to prevent survival and escape in the Bendy and the Ink Machine games. You’ve watched your kiddo play the games, but it seems to you that Bendy and the cast of inky demons have the upper hand.

After watching a few attempts to drain the studio of ink and banish the lingering effects of the studio head’s occult practices, you may have come up with a simple way for your kiddo to survive even the Ink Demon. Bendy is a blessing and a curse in the game, but as the animation studio’s mascot, he’s sure to prevail every time. So, when your kiddo sits down for another go at escaping the abandoned studio, becoming Bendy may be the only way to guarantee their success.

With this Classic Bendy Costume, your kiddo can take on the Ink Machine and all its cartoon demons with the same confidence as the black and white Bendy. This costume comes with everything to turn your kiddo into a living animation. The inky black jumpsuit has an attached, fiber-filled bow-tie made to look just like Bendy’s signature design. An included mask is secured by an elastic band and features mesh eye-sockets that will make navigating the dark studio halls safer and easier. The costume comes with a pair of white foam gloves that polish this cartoon look.

Whether they’re enjoying another installment of the Bendy game series or looking for a charmingly spooky Halloween look, this Bendy and the Ink Machine costume will get your kiddo into character. Dressed as Bendy they’ll be ready to help or hinder retired animators as they attempt to escape the entertainment of classic cartoon troupes.