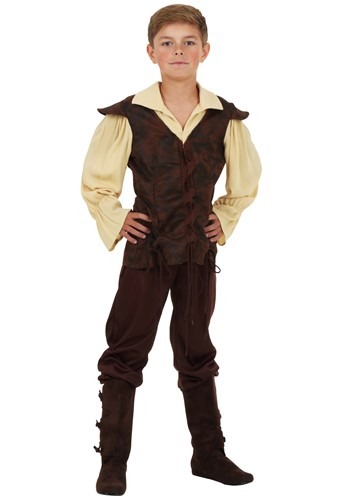 Your son probably dreams of ascending the social hierarchy to knighthood, saving an imperiled kingdom, and living on for time immemorial in cherished tales of bravery, chivalry, and honor. Wow, that's great—what a kid. But none of us can achieve all that at the flip of a turkey leg, you know?

We all have to start somewhere, and it's a noble thing to recognize that earlier rather than later. The path to a gilded set of armor, a majestic steed, and a lance of one's own often begins with a plank of wood, some rocks, and an imagination. And what better way to foster that imagination—at the Renaissance Festival or elsewhere—in a set of garments that hearkens back to the good ol' days, where playing a game of chicken on a horse with a pointy beam was the preferred spectator sport. Pondering how this could be in our Boys Renaissance Squire Costume might just get those imaginative juices in your little adventurer flowing!

This period-authentic costume (minus the polyester and elastic) will have your squire ready to attend you at the joust, feast on mutton after, and awe at those sword-wielding knights and pirates all the while. If you aren't familiar with Arya Stark of Game of Thrones or Inigo Montoya of The Princess Bride, here's a small spoiler: they are really, really cool—and they wore similar attire. Coincidence? We think not. Now's your chance to equip your little hero with the garb necessary for his rags-to-royalty story to begin!