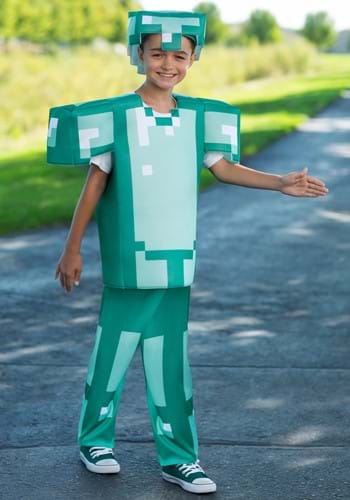 We spent years digging holes and crafting gear. We narrowly escaped the Creeper and we even saw an Enderman once, or at least we think it was an Enderman (it could have just been a really tall lamppost). We did this all in search of diamonds, so we could craft the most glorious set of armor known to mankind, the Diamond Armor. To no avail, we might add. It turns out that finding diamonds just lying around in the ground is pretty tough and turning them into armor that you can wear is even harder.

We’re willing to bet your kid has been spending plenty of time playing Minecraft, trying to do the same thing. Spoiler alert: it’s a lot easier to do it in the game than in real life. That’s why if your child wants to dress up like his Minecraft character this year, then we suggest you make things a whole lot easier by getting this Minecraft Armor deluxe costume for boys.

The diamond armor costume is modeled after the classic armor seen in Minecraft. It comes with a 3D constructed top, a pair of pants and a headpiece. It’s not made of real diamonds (which would probably be pretty heavy to lug around). Instead, it’s made out of fabric and foam, which means it’ll be easy for your child to wear as he explores the biome of your neighborhood! Just make sure you arm your child with a Minecraft weapon or two in case he bumps into a Creeper out there!

When you're in the world of Minecraft there's danger around every corner... AND loot. So, get out there and explore in total safety with a handy set of Diamond armor. Just don't try and mess with any Creepers... they'll still hurt ya if you're too close when they blow up!