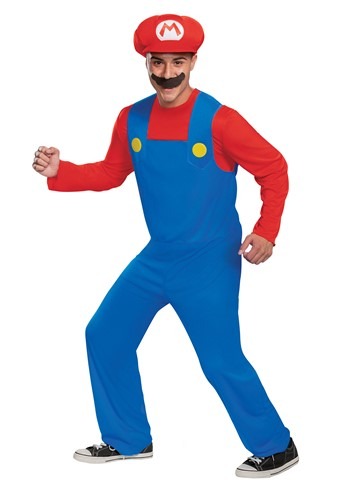 Mario has a pretty great outlook on life. Think about it! He doesn't let anything keep him from having a good time. When his girl, Princess Peach, gets kidnapped by a fire-breathing turtle monster, he grabs a few mushrooms for the road and heads out to save the day. Then, when he's returned her to the castle, he invites all his friends (and his foes) over for a few rounds of go-kart racing. Then, he might just host a tennis tournament before he heads back to work with his bro as the Mushroom Kingdom's premier plumbers! Yes, Mario always lives in the moment and if you want to be a little more like your favorite video game character, then this Adult Super Mario Costume will have you feeling just like the classic Nintendo icon.

This costume is officially licensed by Nintendo, inspired by the classic Super Mario Bros video game series. The costume consists of a simple jumpsuit that has a bright red shirt-style top, with a pair of blue suspenders attached over the top. The front has a pair of yellow faux buttons in the front. The suit has a fastener in the back and it's easy to change into. The hat is shaped like Mario's signature hat and it has the large "M" on the front to finish off the look! Once you have it on, you'll be ready to head on the next big adventure in the Mushroom Kingdom!

The Battle Against Bowser

If you want to be a little more adventurous, like Mario, or if you just want to dress up as your favorite Nintendo character, then this officially licensed Mario costume is the easiest way to do it! Just make sure you stock up on some Super Mushrooms before you head out to battle Bowser in this classic costume!