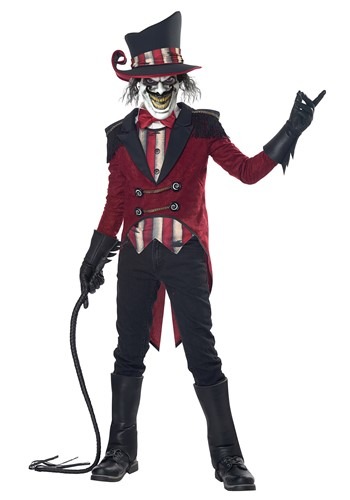 If your house is like a circus maybe it’s time that you give your kiddo a promotion. He’s no longer just another clown running around. He’s now moved up to the position of ringmaster. He’s not just part of the show, we think it’s high time you let him take the wheel and run the show. We’ve got the perfect costume for your kiddo to take on his new role in your circus this Halloween. Check out this Wicked Ringmaster Costume!

His brand new work uniform will start off with a striped vest. There are buttons down the center of the front and it has a jagged hemline. Next, add the jacket. With its devilish colors, cutaway tailcoat, and hypnotizing buttons, he’ll surely incite some nightmares.

The included pair of wrist cuffs are made of foam and slide on with ease. A tricot bowtie is sewn to a neckband, made of the same fabric, and is easily secured around your kiddo’s neck with a hook and loop fastener. You may think your boy’s transformation is complete when you top it off with the ghastly foam top hat, but we’re not done yet. The cherry that tops off this wicked makeover is the molded vinyl mask. It will cover his entire face and truly give him a menacing new look.

Not only will he look like a professional, he will also look as horrifying as a night terror. He may run a tight ship but that’s only because of his one goal. If you think that is to entertain the masses, you are wrong. He’s obviously there to make the general public laugh until they lose sight of their sanity. He’ll make the entire neighborhood a part of his circus with his sinister cackle and a crack of his whip!