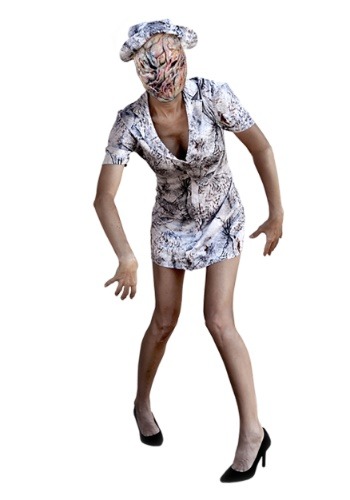 Cripes! Aren’t nurses supposed to help people? It’s a part of one of the Hippocratic oath that they take when they become a nurse. It’s kind of a big deal… but the nurses from Silent Hill didn’t get that memo. Have you played any of those games? They don’t care about your well-being at all! They’re not so much interested in treating any of your wounds as they are interested in scaring the living heck out of you. Whenever we see those creepy nurses, we just book it out of there as fast as we can.

Of course, if you’re trying to create one creepy costume this year, then there’s really no better option than dressing up as a frightening nurse from the video game series. After all, nothing is scarier than a health care worker who’s looking to do harm to their patient! Now, with this Silent Hill women’s Nurse costume, you can get that look with ease!

This officially licensed costume comes from the creepy game series, Silent Hill. It comes with a white dress that has a deep v-neck and various black stains all over it. It also comes with a nurse hat, which can be attached to your hair using a pair of included alligator clips. It’s one frightening look that’s perfect for fans of the Silent Hill series. The mask is in the image is sold separately, so if you want to the full look, then you’ll want to add that to your order as well!

Stay Away from the Hospital

Wear this Silent Hill Nurse costume to the next costume party and you’re bound to give some people nightmares. We really have to recommend that you don’t wear this creepy outfit near a hospital, since you might freak out those poor patients!