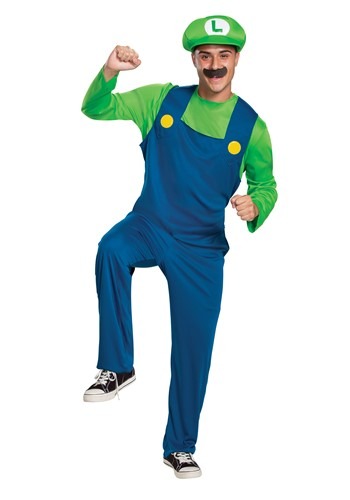 Were you player two? Chances are pretty good that if you had an older sibling, then you spent a lot of time playing as Luigi in the Super Mario Bros games. At first, you may have protested. After all, it was Mario's name that was in the game, so he's got to be the best character to play as! Then, after a few games, you started to love the green-clad bro. Playing as him felt a little like home. He's the younger brother of the Mario bros. He's always got Mario's back, no matter what kind of crazy mess he's gotten himself into. He probably feels the same way about his brother that you feel about your sibling.

Finally, you start choosing Luigi, even when you have the option to choose Mario, because Luigi is your boy. He gets you and you get him. People might even ask you, "Hey, why don't you choose Mario?" To which you smoothly reply, "No, Luigi's my guy."

If you were a Luigi growing up, then wearing this officially licensed Nintendo costume is going to feel like home! The Super Mario Bros Luigi Costume is a simple costume that recreates his classic outfit from the video games. It comes with a green and blue long sleeve jumpsuit that is designed to look like the green shirt and blue overalls worn by Luigi. It has a pair of yellow faux buttons on the front to add a pop of color. Of course, you're going to need a hat to match if you want to be Mario's bro and this hat is bright green with an "L" on the front of it. Put it all together and you'll be ready for the next mission in the Mushroom Kingdom.

Best Second Player of All Time

If you're a proud player number two, then it's time to rock the outfit of the best second player character of all time with this Super Mario Bros Luigi Costume!