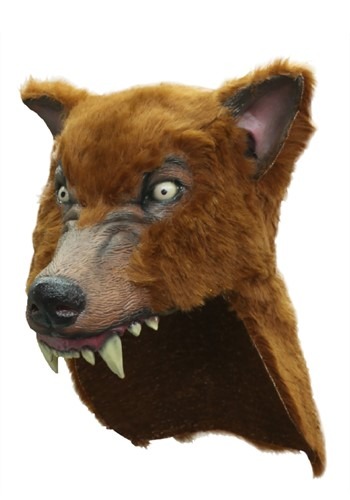 When Sue's date showed up wearing this wolf helmet, her first impulse was to pretend as she had just received an emergency text from a friend. But as she reached for her phone with an expression of concern already on her face, she began to rethink her impulse. Other dates had been hiding their animalistic side. There was Gary who had a box of fingernail clippings hidden under his bed, Mark who bred crickets in his basement, and Stephen who had a habit of streaking at sporting events... no matter how small. When Stephen showed up to Sue's work volleyball game, that had been the last straw. After filing through these memories, Sue looked at the man in the wolf helmet and smiled. As she summoned her Uber, she thanked him. If more dates wore their wild sides on their heads, that would really save her some time!

This wolf helmet might not be the best accessory to wear when you're headed out on a first date, but it will really pack a punch at your next costume party! The faux fur material falls around the ears and neck while the teeth frame your face for a vicious appearance. Perfect for Big Bad Wolf costumes as well as wild Viking warrior looks, this is an accessory that's hard to forget!

Now that the costume helmet has arrived, there's no need to struggle with cumbersome masks. The realistic-looking hood can be paired with a faux leather warrior uniform or a wolfish jumpsuit. A comfortable accessory, this hood can be used as a costume staple for years to come. Just wait and see what happens when the moon is full!