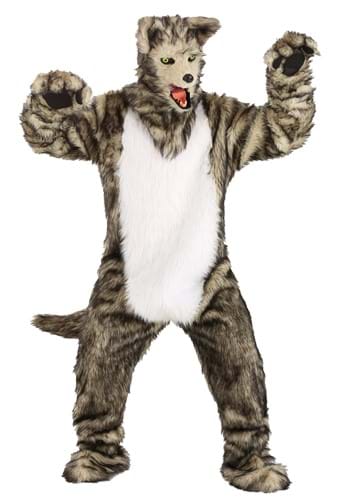 You decide! Not all wolves spend their time huffing and puffing little piggies' homes in. Actually, that's a pretty niche wolfish pastime. Then again, there are the wolves that hang out near Grandma's house, trying to get a basket full of treats. That's also pretty niche.

We like to think that most wolves are pretty cool. They probably like to stick with their own pack, singing during the full moon and galloping through the mountain valleys. Playing tug-of-war with the pups, sunbathing in flowery meadows, stalking juicy prairie dogs for supper. It all sounds pretty great to us. Far from the bad behavior of the big bad characters from fairy tales! Whether you consider yourself to be big and bad or you daydream of pack life, this costume is a great way to take on your brand new wolfish persona!

This faux fur wolf costume is a great way to make a wild impression at any costume party! The bodysuit has a natural black, gray, and cream pattern. The belly is extra shaggy for a cozy feel. Oversize mitts flaunt big pads for a mascot feel. A realistic mouth-mover mask tops off the whole look. Golden eyes peer out from the furry face. The muzzle features a shiny black nose and sharp white teeth that'll move with you as you speak, making it look like your wolfish personality is actually the one talking.

Hack Into the Pack

Finding a tight community can be hard. Humans just don't have to rely on one another quite as much as many wolves can! Whether you're heading out as a big, bad wolf, a lone wolf, or you're wishing to become a part of a pack, this wolf costume will make you into whatever wolf you'd want to become!