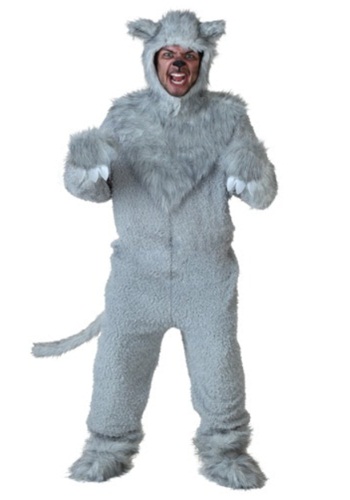 For an animal whose name is synonymous with loner, wolves make an awful lot of friends. Well, maybe the word acquaintances is more appropriate. Okay, can we at least agree that they get close to people? Alright, most of those people are actually livestock, and they'd probably say that the wolf was too close for comfort. Suffice it to say that wolves make many more social connections than you might think. Just ask any little pigs, naked sheep, or little red riding hoods that you come across!

Some people see the worst in a wild animal just because its favorite snack foods are usually small, cute, and covered in fur. So some people will tell you that a wolf in sheep's clothing is trying to pull a fast one. But we try to give all fauna the benefit of the doubt, so we think those people are pulling everybody's leg!

After all, shearing a sheep for a simple meal seems like an awful lot of work for a canine who's a master hunter and doesn't have opposable thumbs. And have you ever heard the lonesome sound of a wolf howling at the moon? We're pretty sure that these guys just want some company from time to time. That's why we made our exclusive Adult Wolf Costume so adorable and furry. Because you might be a creature of solitary habit, but that doesn't mean you don't appreciate a good scratch behind the ears! Where do those wolf-disparaging pessimists think the domesticated dog came from, huh? Mars?