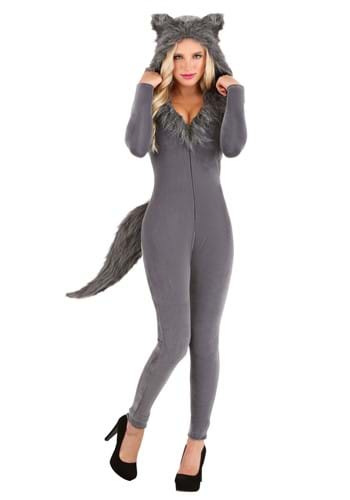 Wolves have been a major part of legends since the beginning of the written word. Seriously, wolves aren't just starring in Little Red Ridinghood and The Three Little Pigs. People around the world have wolves in their legends. Sometimes the wild dogs are a force of good, sometimes they're bad, and sometimes they're just mischevious. For instance, the founder of Rome was nursed by a wolf. In Japan, wolves were once worshipped to protect grain crops from boars and deer. And then there are the legends of werewolves... yeah that legend is everywhere! Are you ready to become part of the legend? Who knew a simple jumpsuit could turn you into a historic icon?

It's hard not to love this super soft jumpsuit. Made by Us, this zip-up jumpsuit is trimmed with gray faux fur. The over-sized hood has hairy, wild-looking ears. It's lined with a soft fabric for cozy comfort. A shaggy tail swings from the back for a fun touch of photogenic sass. Zip into this look, draw on some whiskers, and you'll be ready to run wild, whether you're with a pack or doing the lone wolf thing.

Let Loose with a Howl

There's a reason that people join team werewolf. Why be a stuffy vampire stalking city streets when you could be running through the woods, howling at the moon, and getting in touch with your wild self? You'll love making this costume yours. Want to go the werewolf route? Layer a buffalo plaid shirt and jean shorts to make this costume woodsy and radical. Want to go full big, bad, wolf? Pair this with fur-trimmed shoes and sharp teeth and you'll be ready to howl. Just don't be offended when any sheep turn tail and run when they see you. They've heard the stories too, you know!