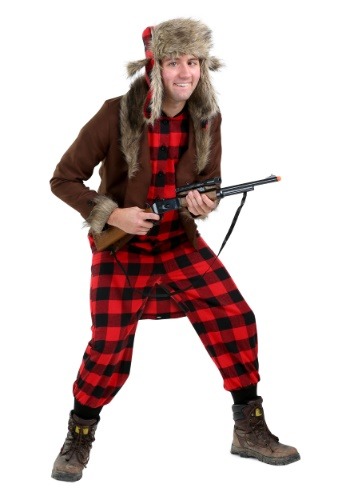 There's all sorts of wascally creatures in the woods but none of them are quite as wascally as the wabbit. Yes, catching those back talking rabbits that think they're so smart is about more than that yummy stew you'll make when you get back to your cabin in the woods. It's about earning back some of that gull darned wespect!

If you want some back woods charm back in your life, having the right ensemble is important. Rocking on a cabin porch with a mysterious bottle with "XXX" on the jug just wouldn't look quite right in modern hunting clothes. Real hunting is hard, wouldn't it be more fun to simply dress up in a buffalo plaid union suit and a brown jacket and have someone take a few shots of you? No, not shot gun shots, we meant shots for Instagram! Sheesh! We get your skepticism, not many people go hunting just for comedic photo ops, but who says you can't start a trend, especially if you're heading out with a toy rifle. We'll tell you one thing, the office rabbits are fully in support of this idea.

So, whether you wear this to the cabin this fall or you're simply attending a costume party, people are sure to get a kick out of this outfit. To make it a couple's costume, have your partner dress as a wascally wabbit, that is, if you're fine with them foiling you once again!