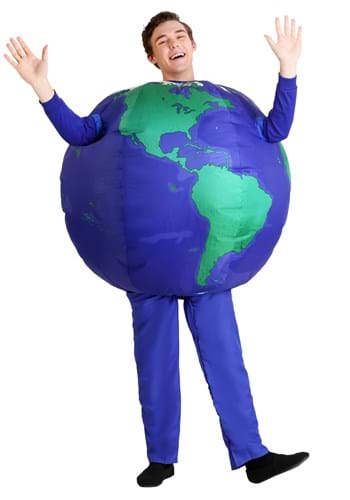 The Original Rock and Roll

When we think the dawn of rock and roll we might think of Elvis or the Beatles or the invention of the electric guitar. That's fair. But here's the thing, we're ignoring billions of years of natural occurrences. What about tons of burning lava shooting into the air isn't rock and roll? Aren't tectonic plates banging into each other hard enough to create mountains cooler than kids bumping into each other in a mosh pit? Remember Pangea, the main continent? The earth literally ripped it into pieces. What about that doesn't slay? Sure, maybe the earth doesn't play drums, strum on a guitar, or scream into a microphone but we think geysers, canyons, and the general creation of the universe's only known life forms is just as cool as coming up with a top forty hit or even a platinum album. It's time to pay tribute to the one and only, original rock and roller... the earth!

This inflatable earth shows all your favorite continents and oceans all on one globe! This earth costume will be a lot of fun to wear to Earth Day events, peace marches, and any costumed events that come up and since it's Made by Us, it's quality enough to be worn again and again! Holes for the head, arms, and legs let you speak (or sing) for the earth even while you're orbiting around the party.

Give Us Some Space

Want to make this into an awesome group ensemble? It's easy to pair this costume with sun, moon, and other planets to create a creative group solar system costume. The best part is, you can be sure no one will dare litter when you're around. Simply cross your arms and they'll tuck their pop bottle away to recycle later. When our planet gets up close and personal, this globe always makes an impact!