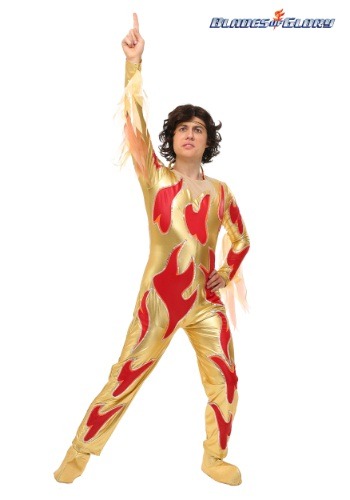 Chazz Michael Michaels. Sex on Ice. A Tsunami of Swagger. A leather-clad Lothario. An ice-devouring sex tornado! You know the man, and you know the reputation. But did you know that now he has to set everything aside to team up with his one-time arch-nemesis Jimmy to conquer the pairs figure skating world?

We suspect you do since you're eyeing this officially licensed Blades of Glory costume! If you're all about the action of the 2007 slapstick comedy, relive some of your favorite movie moments from the Will Ferrell and Jon Heder classic when you rock this replica costume. With a design inspired straight from the movie, this costume is ready for glory whether you're putting on your skates solo, or if you're going to team up with a partner for Halloween's top costume combo, Fire and Ice!

Made and designed by us, this costume has the signature fire design that Chazz rocked when he rolled into the 2006 World Winter Sports Games alongside Jimmy. A poly/spandex jumpsuit has chiffon fringe pieces hanging from arms for serious figure skater style. Red flames with sequin trim contrast the golden suit along with the headband, and foam boot covers give the appearance of wearing skates. When you wear this officially licensed Blades of Glory Fire jumpsuit, you'll be able to perform the famed fire and ice routine with your partner, or just bring your signature sex appeal off of the ice and into the party. Personal philosophy: Clothing optional!

Finally, you've found the costume that will give you the courage and fire to hit the ice competitively just like all your ice skating heroes of old. Now all you've got to do is nail that triple axel (we hear it can be a bit tough!)