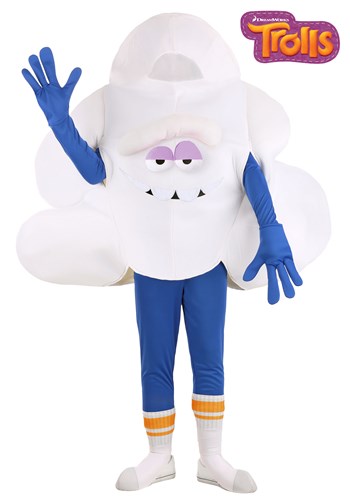 Ever wonder what life among the clouds is like? It turns out that things get pretty boring just floating around in the skies. That's especially true when you are looking down on the antics of the Trolls. From their expert dance skills and stellar singing performances, it has to be pretty tempting to drift on down and join in on the fun. That's probably why Cloud Guy decided to show Poppy and Branch how to navigate the mysterious ways of the forest.

But, what happens next? It's not like a Cloud Guy can chase Branch around, just pulling pranks all day. What other ambitions might a denizen of the skies have? Well, it turns out that when Halloween is just around the corner, they can get puffed up on treats and really rain down the fun. If you'd like to participate, you won't have to go daydreaming, either. We would like to introduce you to a guy who can bring all of your cumulous curiosities to fruition!

Soar your way into the fun of Trolls with this officially licensed Dreamy Cloud Guy costume. This is a Made by Us design that came straight from our in-house team. It starts as a long-sleeved shirt that matches the pair of blue pants. You'll fit the foam tunic over your head, giving you the cloudy appearance. Mesh at the top lets you look through without breaking your character, too. Fit on the asymmetrical boot covers to represent Cloud Guy's unique running socks and you're ready to lead the Trolls to fun!

Help the other characters of Trolls feel like they've finished a World Tour when you give them a genuine high five from the iconic Cloud Guy in this costume. Group up with some friends with the rest of our Made by Us line of officially licensed Trolls costumes or just live the high life as Cloud Guy on your own!