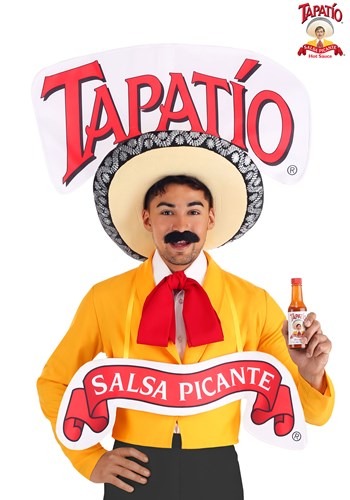 You're hungry. There isn't much time. And yes, there's food in the fridge. There's a whole box of white rice from your order of Kung Pao chicken two days ago. You could open a can of beans, slice some cheese and make a meal of it. But the lack of flavor in that sad meal is enough to make you sob at the table like a three-year-old. There's no need to feel shame in inner food temper tantrums. We've all been there. And, if you know what's up, you know that the hero of this meal lies in the condiments shelf of your fridge. He's got a sassy little red bottle, a brilliant mustache, and wonderfully vinegar-rich after taste. Yes, Tapatio is here to give your leftovers a lift! Wouldn't it be nice if Mr. Tapatio could spice up the rest of your life as well?

Adding this hilarious costume to your next get-together will have the same effect on that event Tapatio has on your eggs, it'll really spice it up! The costume is designed to have the same dapper look as the man on the bottle. A cropped bright yellow jacket, red necktie, and wide sombrero create the basic outfit while the letters "TAPATIO" and "Salsa Picante" make your character obvious to anyone who hasn't studied the bottle while munching on a Carne Asada burrito.

A Matter of Taste

When it comes to finding a tasteful costume that'll delight everyone who sees it, representing Tapatio is a grand idea! After all, those who have tasted it, love it, and those who are missing out need to be educated. So make sure you bring along a little Tapatio for those who don't know the flavor. Dash it in a bag of chips and those folks will want to take a picture with their new flavor hero!