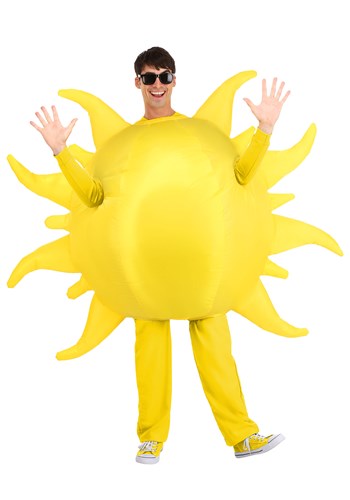 The sun is sort of our hero. It's crazy, we know, but just think about it! On a cloudy day, everything can seem a bit gloomy. It can be hard to even drag yourself out of bed on days like that! Then, without warning, the sun bursts through the clouds to add a bright glow to everything around! It's like a huge weight being lifted off of the world when the sun shines his rays on the Earth. The sun is sort of like that guy at the party who livens up the whole place the second he walks through the door. Can you imagine what it would be like to be the sun?

Well, that's a question that we've pondered quite a bit! In fact, we dreamed about it so much, we decided to make a costume about it. Our costume designers got to work to capture the essence of the sun in this Inflatable Sun Costume!

This Made by Us costume helps you be your brightest self! Taking inspiration from the big yellow ball in the sky, this costume comes with a lively yellow suit. It's made out of a windbreaker fabric with elastic in the neck, arms, and legs to make an airtight seal. The suit has a small attached fan with a battery pack. Flip the switch and the costume inflates in just a few minutes! The outer edge has some nice, wavy sun rays to help you look like a summer day! You'll be looking so bright, you might even need to break out your sunglasses!

Of course, this Inflatable Sun Costume isn't just for those looking to brighten up the mood. It's also a great option for astronomy buffs who happen to love yellow dwarf stars! Hmm... you could even join a Seven Dwarves group as a hilarious pun idea. Or enlist a friend to be your moon for a sun and moon Halloween Costume!