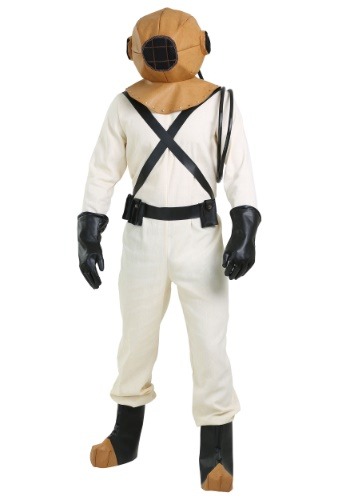 They say there are plenty of fish in the sea. For a long time, well financed potentially crazy inventors were racing to prove it. Actually, replace fish with treasure. There's plenty of treasure in the sea, and that is what those inventors were looking to find.

People will do some pretty crazy things for gold. They tried putting a giant bell in the water and used a tube to breathe the air trapped in the iron opening. Believe it or not, it worked to some extent, though salvagers often perished in the process. They also tried lowering water tight barrels in which someone would lie face down, their arms outside the barrel, ready to grab whatever treasure they might find down there.

Those 19th century inventors went on designing underwater devices. Some looked silly, some looked nightmarish, until they came up with something similar to the fine contraption you see before you. This suit with its bronze helmet and canvas body was used to put rescue the sunken treasure from the dark depths of the sea for more than a hundred years. And after all that time they still didn't find one measly mermaid.

Now, you too can join the ranks of the great oceanic explorers in this deep sea diver costume, you don’t even have to get wet! You may be looking for sunken treasure or maybe you'd like to find the Kraken to give him a piece of your mind once and for all. Either way, in this costume, you're bound to dive into a night of adventure. Just a warning, this ensemble is not water tight, so don't go looking for Atlantis.