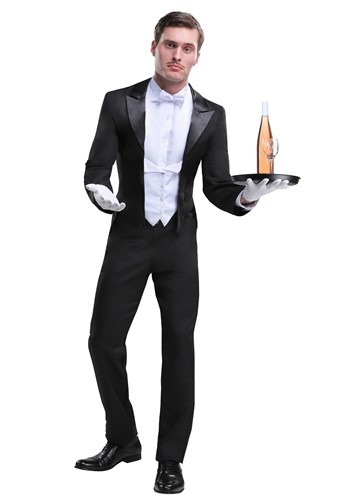 Better hurry.
This sold 12 times in the last 48 hours.

A butler has a few career choices. Some end up in the old school country mansions. Some help out an orphaned super hero while serving in an underground lair. A butler could even end up at the White House. Not in the oval office, just in the kitchen, come on get real.

Every position has its ups and downs. In a large manor, the head of household isn't the one with the deed tucked in a safe somewhere. In a house with more servants than residents, it's the butler who pulls the strings to keep things running smoothly. Let's say there are about forty servants, a butler would have to keep this small village of people organized, on task, and proper at all times. So, in a way, the butler of a mansion would be a little like a mayor that knows a lot about wine, silverware, and place settings and serves dinner in his free time.

Now, the life of a superhero's butler is a little different. It's much more lonely but you have to know a lot less about wine and a lot more about gadgets because for reason these men in livery have picked up some mad inventing skills along the way. We don't know much about becoming a White house butler, but let's assume you have to learn martial arts as well as serving as a wine sommelier.

Whether you want to dress up as a butler this Halloween or you're dressing up for a play this dashing costume will make you into a dashing and sophisticated head of household. In the suave black jacket and white shirt front you'll look like you've been cultivating the perfect menu even if you don't know the difference between Cold Duck and Dom Perignon. Just be sure to duck out of there once someone says, "The butler did it!". That's not going to end well for you.