Unique Halloween Costumes: Be the Only _____ at the Party 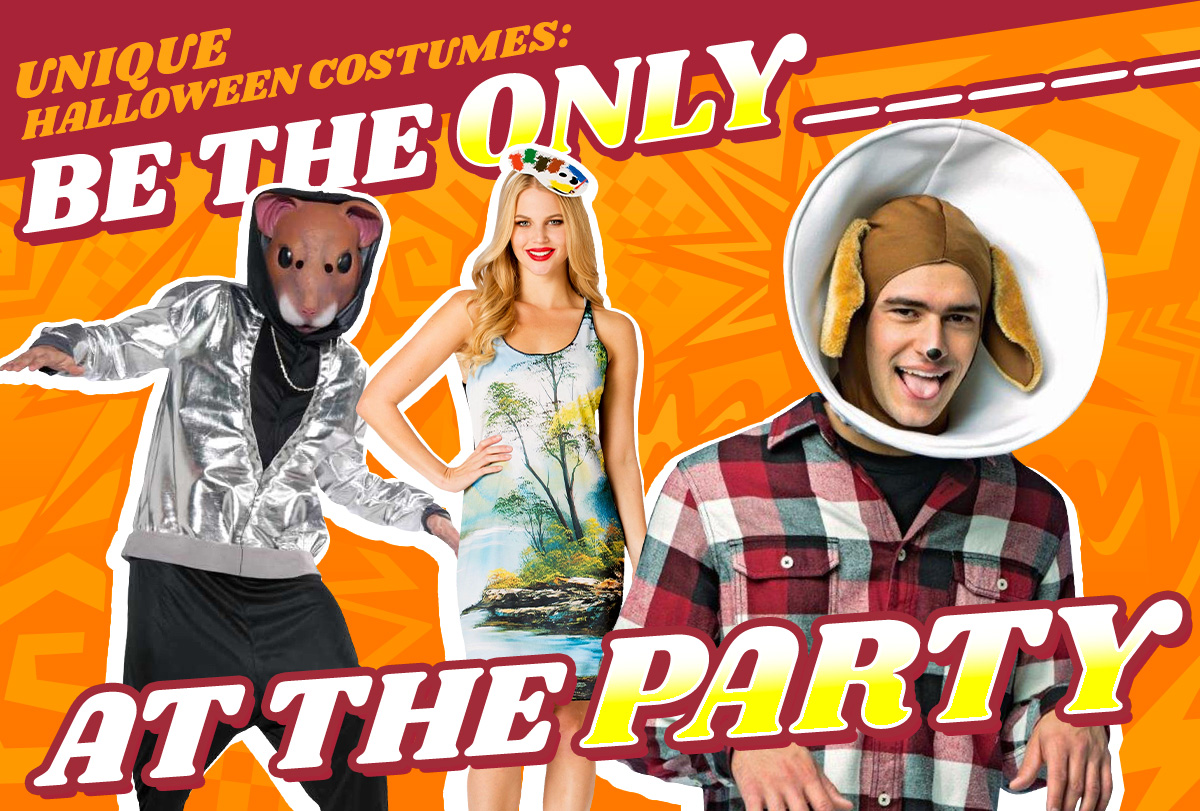 One of the best parts about Halloween is the chance for you to dress up however you want, without getting judged for it. It’s the one night you can be whoever you’d like to be. Though no number of pumpkin spice lattes, caramel apples, and piles of candy can fix most people’s biggest fear: wearing the same costume as someone else. You get that weird knot in your stomach because what if someone else got the same costume as you? They couldn’t...they wouldn’t, but they just might. Just like attending an event without knowing what the dress code is, you need to have faith in yourself and just go for it. Don't worry though, we’re here to help. We’ve put together a list of unique Halloween costumes so you can pick one that your fellow party-goers most likely haven’t picked up already.

To start off our list, we're going to cover some unique Halloween costumes for guys. Now, we're sure you've seen many guys dress up as rappers at Halloween parties, but what about a hamster rapper? If you're looking to give off some major Kia Soul vibes, look no further. Likewise, we're sure you've seen many historical figures at Halloween parties, but how often do you see an actual bust costume? With those, in addition to a terrifyingly tall pumpkin monster, a dog with a cone, and a beer pong table, we're sure at least one of these will make you the only one at the party.

Word on the street is that a Space Jam sequel is in the works. We aren't sure how many people have heard this yet, so we think sporting a Tune Squad outfit is sure to be a crowd pleaser. Who doesn't love a good throwback? The Price is Right is another fun costume that may sound popular, but in reality, how often do you see it at parties? Bob Ross is yet another popular theme, but we feel it'd be fun if you took the non-usual route and decided to dress up as one of his paintings. Not only will people find you hilarious, but they might just strike up a conversation due to the unusualness. Next up, GLOW proved to be a major sucess for Netflix. You may see tons of girl wrestler costumes, but girl boxers need representation, too! Suit up and find your rival at the party, it'll make for a perfect photo op. Lastly, everyone has a soft spot for ice cream, so why not dress up as an ice cream cone? There'll be plenty of hot dogs, Pickle Ricks, and other salty foods, so curb their sweet tooth with this ice cream cone costume. 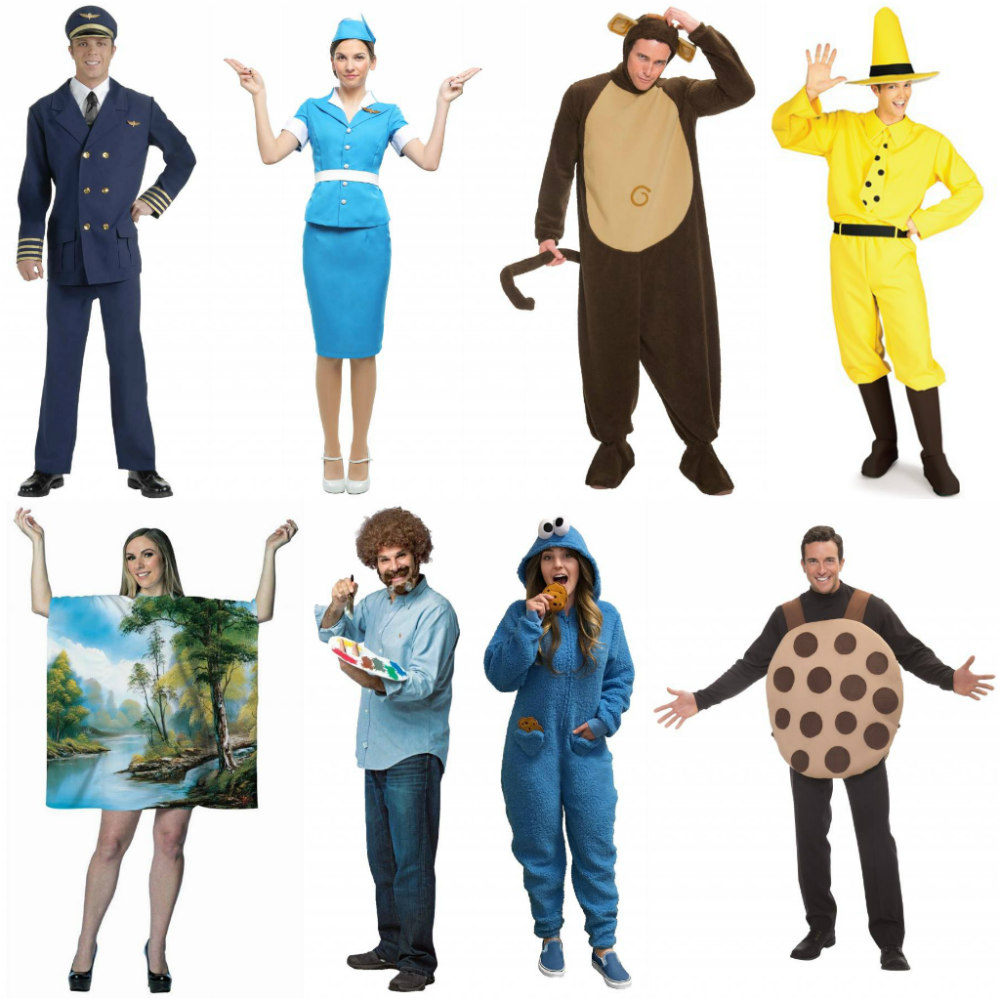 Thinking of unique Halloween costumes for couples can be a challenge. Having one brain think of a creative costume is already tricky, but when you put two together, it gets even harder. Couples around the world are fighting to have the most unique costume, so how can you think of something more unique? There might be many Britney Spears "Toxic" looking flight attendants, but what if you and your partner played it a bit more classy and dressed up in professional pilot and flight attendant attire? Pop culture is always going to be a popular theme, but when's the last time you've seen a Curious George costume (besides at your kid's Halloween party, come on Susan!). Bob Ross will always be hilarious, so we put the obvious pairing above. And lastly, to bring nostalgia costumes back, we're going with the Cookie Monster and cookie costumes. The Cookie Monster was most people's favorite character on Sesame Street (besides Elmo), so we're sure the party will get a kick out of you and your partner's blast from the past idea. 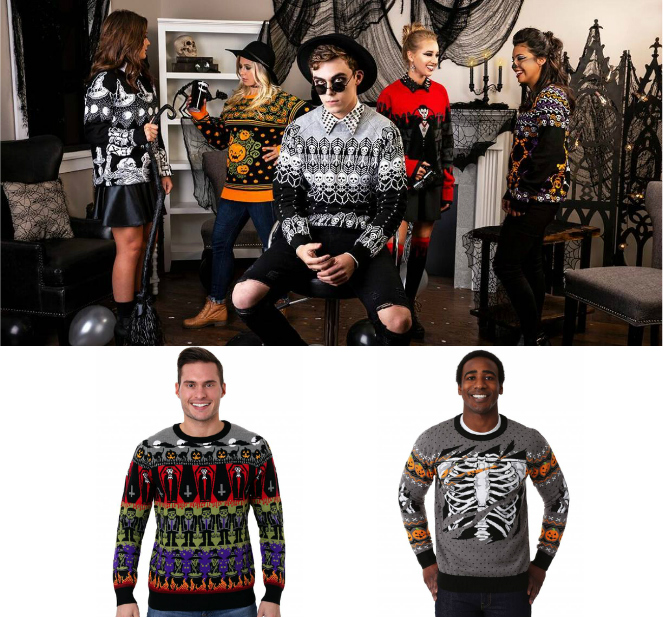 If you're looking to really stand out at the party, sport an ugly Halloween sweater. You can play it really simple by wearing just the sweater, but if we're being honest, you'd stand out much more if you add some makeup to match. If you'd rather not have to put makeup on your face, try out a mask. We have tons of masks to match whichever sweater you decide on. We have kids' sizes as well, so throw some makeup on your kids to have the ultimate unique Halloween costume for kids.

So do you feel confident to head to the party now? Hopefully! If you need more inspiration, be sure to check out our costumes for men, women, kids, and couples. Maybe you have other ideas for unique costumes? Feel free to share your ideas in the comments below. Stay spooky and have a blast this Halloween!