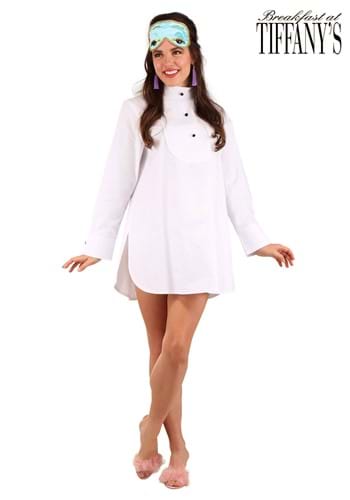 Whether you're a lover of all things Hepburn or you simply have a soft spot for quirky-cute Holly Golightly, you can feel like you arose this morning as one of Manhattan's most elegant socialites when you slip into this costume. And while many have pulled off the Holly Halloween look before, they often go the classic route of a black sheath dress, gloves and pearls. Holly's signature pajama look is much more unique on the Halloween scene — much like Golightly herself! We'd meet you for breakfast just about anywhere in this adorable and classic film-inspired costume!

A far cry from the usual sweats you wear to bed, this exclusive costume is an exact replica of Holly's alluring and elegant sleeping ensemble, crafted in our very own costume studio. It's a tuxedo-inspired, oversized sleep shirt with black buttons, a stand-up collar, and side slits. The purple earrings provide a pop of color and style and prove you stayed up a bit too late last night partying, and the mask, well, only Holly Golightly could possess such an ornate and truly eye-catching satiny eye mask (until now, that is)!

It's a Holly Jolly World

You may love living in Holly's world so much that you find yourself doing new and unsurprising things, like adopting a cat and naming him Cat, or becoming overly involved in your neighbor's lives. Just don't forget to set your alarm for that Halloween bash, party gal!