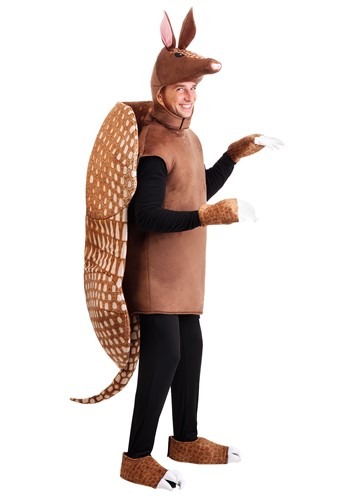 Got Armor and Proud of it

You know how some folks that aren't very familiar with a creature will say that they all look the same? It may be a bit insulting to some critters who are proud of their distinctive features, but it's a statement that probably won't frustrate members of the armadillo species. From what we hear, they're pretty darn proud of their armor!

When a Mommadillo has her pups, she's pretty much always going to have them in sets of four. And that's not even the craziest thing about this "little armored" creature. Turns out the whole thing about them rolling up into a ball like their hedgehog friend is a bit of an exaggeration. Only one type of armadillo can do that. The rest actually have so many layers of armor that they're not quite flexible enough for it! It only takes one glance at an Armadillo on the side of the road, though, to know that the critter would make for a great Halloween costume. And that's exactly why we crafted this one!

We're not zoologists here at HalloweenCostumes, but after showing our design team some baby armadillos, the obsession was real and this Adult Armadillo Costume was born. Crafted with care and extra attention to detail, we're sure you're going to love the style and feel of this costume. It's designed as a tunic with a soft-sculpted shell on the back. The hood straps under your chin and gives you the adorable armadillo face. With mitts and foot covers included for the full effect, we're sure you'll have a great time rolling around like an armadillo in this costume!

We can rather understand where the Central Americas came up with the name "little armored one" for the Armadillo, but we're probably, even more, a fan of the Aztec name "ayotochtli." Who doesn't want to be a Turtle-Rabbit!? We know you'll love it!