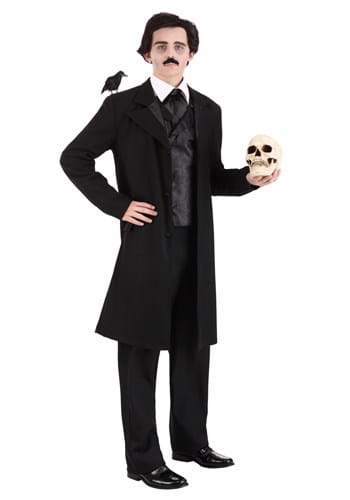 What was it that gave Edgar Allen Poe his twisted imagination? Poe started writing from an extremely young age, publishing an epic historic poem at the young age of eighteen. The only epic writing we were doing at that age were angsty posts on social media! After that, he went on to write some of the most exquisite works of horror and remake the legacy of American literature. Turns out, you don't need to be from the moors of England to excess a truly dreary muse! Poe kept readers on the edges of their seats with stories of guilty consciences, clever revenge, and deep mourning. Basically, he had the macabre-minded Victorians eating out of his hand! Without his strange imagination, we might not have the rich horror and detective genres that keep us in goosebumps to this day, and what a dark world that would be...

This historical costume is Made By Us, which means it was designed by our in-house creative team! This dismal yet distinguished look features a long black coat and a subtle paisley vest with a silky cravat layered underneath. You'll also receive a raven that can sit on your shoulder. While the bird won't croak the iconic word, "nevermore" we're sure that it will make this costume instantly recognizable!

History in the Shaking

The Raven, The Cask of Amontillado, The Tell-Tale Heart. Everyone has their favorite Edgar Allen Poe story! This is one historical costume that's perfect for Halloween and beyond! Where ever you're wearing this costume, make sure you pull off this look with pale makeup for a sickly look, a tousled head of hair, and a mustache that'll place you firmly in the 19th century. Just don't be surprised if you're asked what new horror you're dreaming up these days, it's not everyday people get to meet the founding father of frightening fiction!