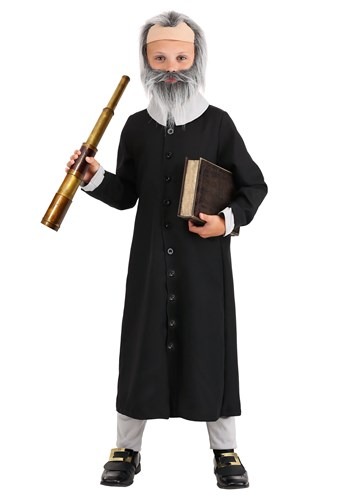 Reach for the Stars

It's a simple phrase, really. We say it to kids all of the time. Usually, it means to go out and chase after your dreams, but there's a certain fella from history who took it sort of literal! Galileo Galilei spent most of his time studying the heavens, trying to make sense of all of the celestial bodies floating around up there. He even tried to argue that the Earth revolved around the Sun! Crazy, right? Well, it turned out he was right... even though some of the astronomers and political figures were not a huge fan of his findings.

The point is Galileo wasn't shy about reaching for the stars and he made some of the greatest discoveries of all time! If your child decides to reach for the stars, who knows what sort of amazing things they'll discover. That's exactly why we think Galileo is a great role model and it's why we decided to make this Kid's Galileo Galilei Costume!

Our costume designers wanted to capture the look of famous astronomer and mathematician, Galileo! They studied classic portraits of him to craft this Kid's Galileo Costume. The costume starts with a  jacket that has a button-up front, along with a contrasting collar and sleeve cuffs, just like he's seen in the Justus Sustermans painting! The costume also comes with a pair of slim-fit pants that have elastic in the waist for a comfortable fit. The included wig and beard set gives your child the look of a wizened look of the brilliant astronomer.

Some stars shine brighter than others! That's just science and we're pretty sure that your child will be the brightest star of them all when they dress up as Galileo!