Susan B Anthony Costume for Women 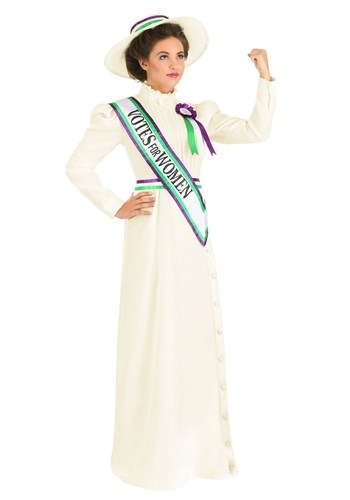 There are some people that are born movers and shakers. They see injustice and cannot rest until they've turned the tide. Susan was one of those people. She attended her first women's suffrage event when she was twenty-eight, near her family's home. Three years went by and she was on a podium herself, delivering her first speech of many. After that, there was no stopping her.

After writing articles and speaking publically at various venues, Susan B Anthony was arrested in New York for the first time for casting her ballot in a public election. That didn't stop her, she only got stronger. In fact, she continued to fight for the women's vote until she passed away, thirty-four years later in her late eighties. She didn't live long enough to see women throughout the United States cast their first legal votes, but she didn't stop from the moment she went to her first suffragette meeting until the very end of her days!

This Susan B Anthony costume was designed to pay tribute to the women's right activist and all the ladies that marched and spoke out beside her. The long dress zips up the back with a ruffle around a high-neck and puffed sleeves. The dress is decorated with a purple and green "Votes for Women" banner as well as a button attached to the breast. Topped off with a matching hat, this ensemble will make you feel connected to Susan B Anthony, one of the biggest movers and shakers in women's rights history!