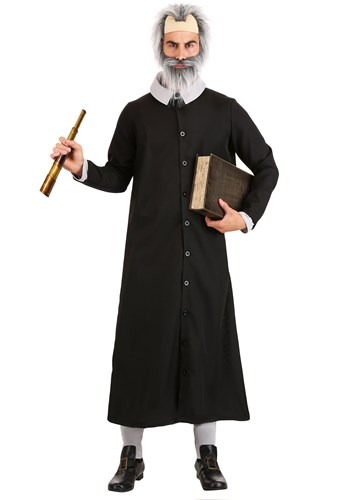 Galileo had guts. He also had an brother who borrowed tons of money from him to pursue his dream of being a professional lute player (brothers, right?)... but that's a whole other story! Armed with nothing but mathematics, a telescope (which he invented), and a plucky attitude, he decided to make the argument that the Earth revolved around the sun. Seems kind of obvious now, but back then, the powers that be didn't like that sort of talk. In fact, Galileo even started a little feud with the Pope! The Pope of the time wasn't a fan of Galileo's scientific theories, so he made Galileo renounce his scientific findings and he eventually put Galileo on house arrest. He put everything on the line to show the world his findings, and became the "father of modern physics!"

It just goes to show that sometimes, you have to question the status quo! That's exactly what this Made by Us Galileo Galilei Costume does!

Our costume designers are big fans of Galileo. His defiant attitude and dedication to finding facts are awesome and they wanted to create an outfit that captures the spirit and attitude of Galileo. They looked at classic paintings of him and this is what they came up with! The costume stars with a black jacket that has buttons down the front. The white collar and matching sleeves add a pop of white contrast the to dark coat. The costume also comes with a pair of pants and a wig that's made out of synthetic materials. It has an attached beard and mustache to help give you his iconic look from various historical portraits. Put it all together and you might be ready to challenge the current status quo on astronomy!

Reach for the Stars

You can study the stars... or you could start a brand new feud with the Pope. We recommend doing the first one and avoiding the second one!