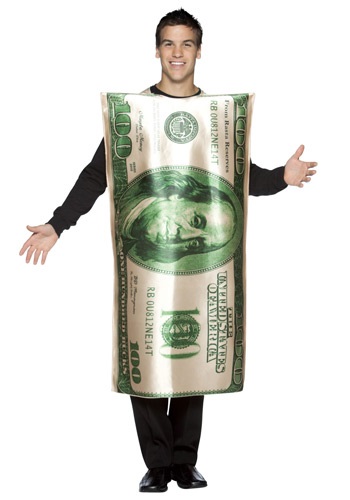 It’s all about the Benjamins… which means it’s all about you, baby! This costume is for the confident only: no 5s, 10s or 20s for you. No, you’re all about the big bucks. Moolah. Struttin’ your stuff, secure in your position as a big spender. Ever dreamed about rolling around in a big pile of hundred dollar bills? This Mens 100 Bucks Costume isn’t quite that extravagant, but it’s pretty darn close.

A hundred bucks might not be what it used to be, but can still get you quite a bit. You can get a 24-inch flatscreen. You could get 25 40s, or 6 and a half pizzas. We’re gonna have to crowd around the TV a little, but that sounds like a party to us. You’ll feel like the richest guy in the room in this goofy costume.

Please don’t try to spend this Mens 100 Bucks Costume––counterfeiting holds a penalty of up to 20 years in prison and a fine of $250,000 in the United States, and while this giant bill would only pass muster with the least observant of sale associates, even conspiracy to commit the crime can come with a 5-year sentence. So if you have to make a joke about trying to spend it, be really, really clear you’re joking. You’ve been warned. And watch out––if you get caught in the rain, you could still be accused of money laundering. Sorry. We’ll show ourselves out.