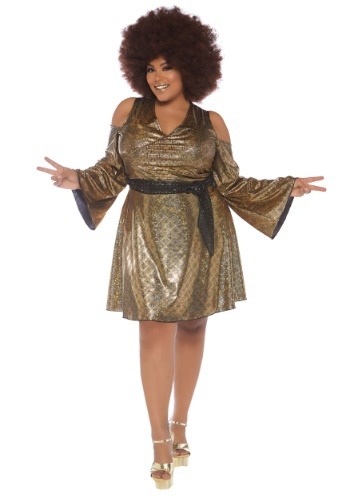 Today, all the kids are listening to mumble rappers and toting fidget spinners on their fingers. The world is a completely different place than it was back in the 1970's. Back then, people were making rocks into pets and using color-changing rings to decode their mood. Now, people purchase exotic pets over the internet. Also, using the internet to decipher illnesses is another completely acceptable activity in our society. (Basically, the world wide web runs every aspect of our lives now.)

Even though many aspects of life have dramatically changed since the 70's, some fundamental elements have stayed similar for the most part. For example, the fashion sense isn't too far off from the way it was during the swinging 1970's. Sequins and sparkled were all the rage and guess what? They still are. Back then, fashion was all about flares and belled bottoms. Just recently, the trend has come back in style which is why the women's plus size disco doll costume is such a prime choice. The dress captures the essence of the era but it's also considered modern and high-fashion too, making it a great decade-themed costume choice.

You'll be dripping in a luxurious gold sheen that can't be ignored. The V-neck dress fastens around the body with a functional back zipper. It features a stylish mock-wrap silhouette that looks very flattering on plus size body types. The long sleeves have flares on the ends and cut-outs on each shoulder, giving the dress a sassy edge. Finally, an attached belt with a plastic side buckle completes the snazzy disco doll costume.

You'll be a radiant disco queen where ever you're hustling to as long as you pick up some key accessories. Pair this costume with gold heels and an afro wig to be the ultimate dancing queen.