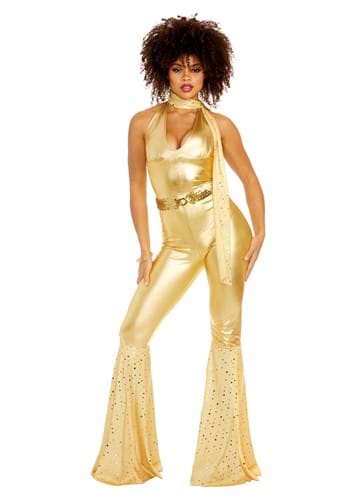 What if humans weren’t the only creatures on Earth to sometimes feel funkalicious? I bet all sorts or other animals would just love to boogie down and get their groove on. Dogs with bell bottom pants and fab bloused shirts would be so cute. Copacetic cats hanging out all day and night would be off the hook.

The best would probably be giraffes though. Imagine the size of those slammin’ jumpsuits! It would be off the hook if we could explore the savannah and know that there was a chance that we could stumble upon a bunch of funky fresh, jive-talking giraffes enjoying their local disco. We think that they would have some freaky deaky moves that would show even our best disco dancers a thing or two about style!

Well, even though jive-raffes aren’t real, we should go on living as if they were. Enjoying discos in this Women’s Gold Disco Fox Adult Costume will be the easiest thig you ever did. The snug, golden jumpsuit zips in the back and has all the details that take you right to the 70s. The fringed bell bottoms, the gold-on-gold belt, and the long scarf all scream disco fever.

If you want to boogie down in 1970s style, then this disco fox costume is the perfect thing for you. You will feel and look golden when you wear it. From head to toe, whether in the savannah or the city, you will scream disco queen all night long!

This costume is made of 95% polyester and 5% spandex so it should be very stretchy. This costume is also true to size but if you are not sure still you can reference the size chart and our sizing tip page!