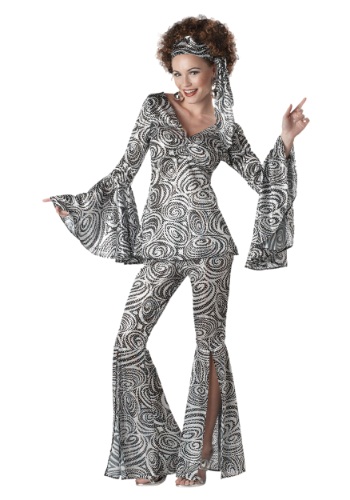 Anyone who's ever stepped out on a neon dance floor, with the lights of the disco ball sparkling in their eyes, probably knows what it's like to boogie til you just can't boogie any more. But, do they know how to dress while they're at it? Slip into this far-out Foxy Lady Disco Costume, and you'll look ready for the ultimate dance party!

We totally know that feeling of disco music taking us over, resulting in a vicious case of Saturday-night fever. It doesn't matter if we're at the mall, or in an elevator, or in the middle of an important meeting. Once we hear the high speed thumping beats of a funky disco tune, dancing has to happen, no questions asked! That's got to be the grooviest part about dressing up like a foxy disco chick. Whether you're at a Halloween party, a funky 70's themed get-together, or you're in the mood to do the Hustle just because you can, anybody would be crazy to get in the way of your slick, stylish dance moves!

This wild costume has all the glitz and glamour of disco in one wicked outfit. The matching top and pants feature glittery sequined swirl patterns, with flared out sleeves and legs for extra pizzazz. It also comes with a matching head scarf, which you can tie around your killer 70's hairstyle (we've always been a fan of feathering, but that's up to you), or a vintage style wig. It's the perfect way to boogie til you can't anymore, although we always recommend saving some for later!