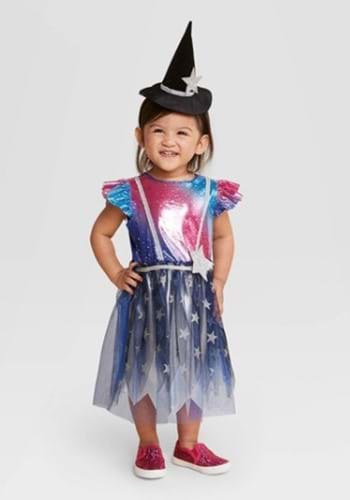 Lots of witches prefer a standard kind of lifestyle. They feel most comfortable when they're hidden in a thatched-roof hut in the center of a deep forest, with plenty of cats and owls living on the front porch and perhaps a nasty spell or two to trip up an interloper. Some witches, though, like to dance to their own beat. Rather than a dark and gloomy forest, they love to live on the brightest star in the center of a spinning, twirling galaxy. Rather than cats and owls and the occasional lizard, they keep shimmery comets as pets. Rather than eye of newt and boiled toads, they feast on stardust and Milky Ways (what? Witches need chocolate too!) Is it any wonder they're so glamorous?

She's a glamor girl through and through, so let your little one be the sparkliest witch of all this Halloween! The Star Witch Costume for Toddlers has a super twirly skirt made of blue and silver fabric with a zigzag hemline and printed with silvery stars. The sheer blue outer layer makes the skirt look as mysterious as the midnight sky. A thin silvery braid wraps around the waist and is decorated with a five-pointed star. The bodice is as colorful as the brightest galaxy, with ruffly sleeves, silver braid detail and sparkly pink, purple, and blue fabric. The cone-shaped witch's hat is embellished by another silver star.

The Goodest Witch of All

You know just by looking at her that a witch this fancy can't be anything but a nice witch! Her dream of a magical Halloween costume came true after wishing on a star, so she's here to pay it forward by brightening everyone's autumn season.