Group Costumes to Wear to Your Next Costume Run 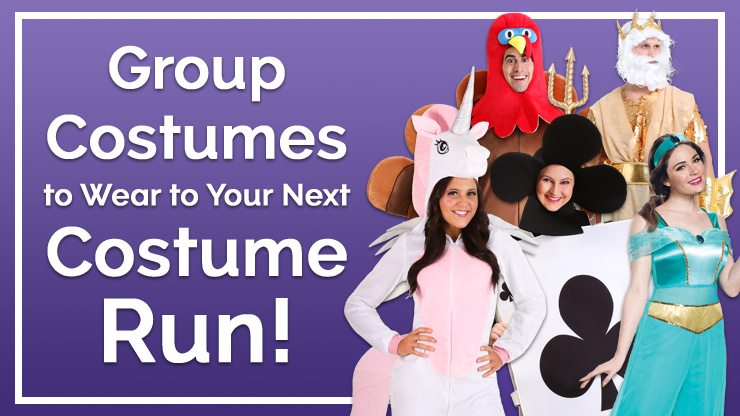 Running may not always be for everyone, but costumes put the fun into fun runs. If you and your pack are looking for some group costumes for marathons, half-marathons, 5ks, triathlons or any other race of your choice, we have a whole host of running costume ideas for you! If you're not into running in full costumes, we'll also mention some running accessories along the way. Whether you're a fan of Run Disney events, Bay to Breakers, Turkey Trots or Color Runs, we've got the costumes for you and your running buddies.

The Best Costume Ideas for Bay to Breakers 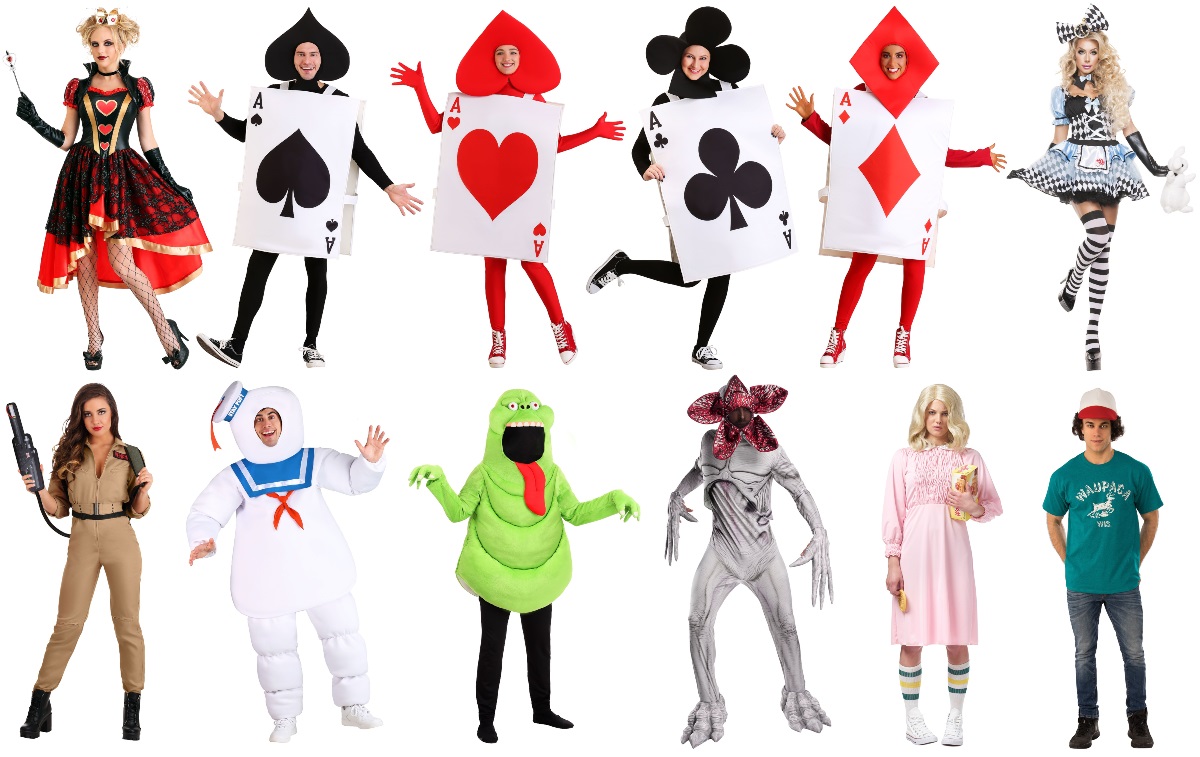 Bay to Breakers is the cream of the crop when it comes to costume races. Is it a race? Is it a massive party? It certainly is all of the above and more, so your group will need the best group costume idea if you want to stand out from everyone else in costume. If you're looking to still keep running as a theme, incorporate your favorite shows and movies where the characters run at least a little bit. Who wouldn't want to see a Ghostbusters costume group with people in Ghostbusters jumpsuits running after the Stay Puft Marshmallow Man or Slimer? (Or perhaps the other way around?) If you're looking for costumes for a group of five or more, designate an Alice and a Queen of Hearts, and the rest of your group members can be the card soldiers. Make sure that the Queen screams "off with their heads" as everyone runs after Alice! Perhaps your group really loves Stranger Things. (We certainly do!) You can easily have costumes for groups of four if you're going as the group of boys that started it all, but you can always add someone in an Eleven costume—or a Demogorgon costume for everyone to run away from. 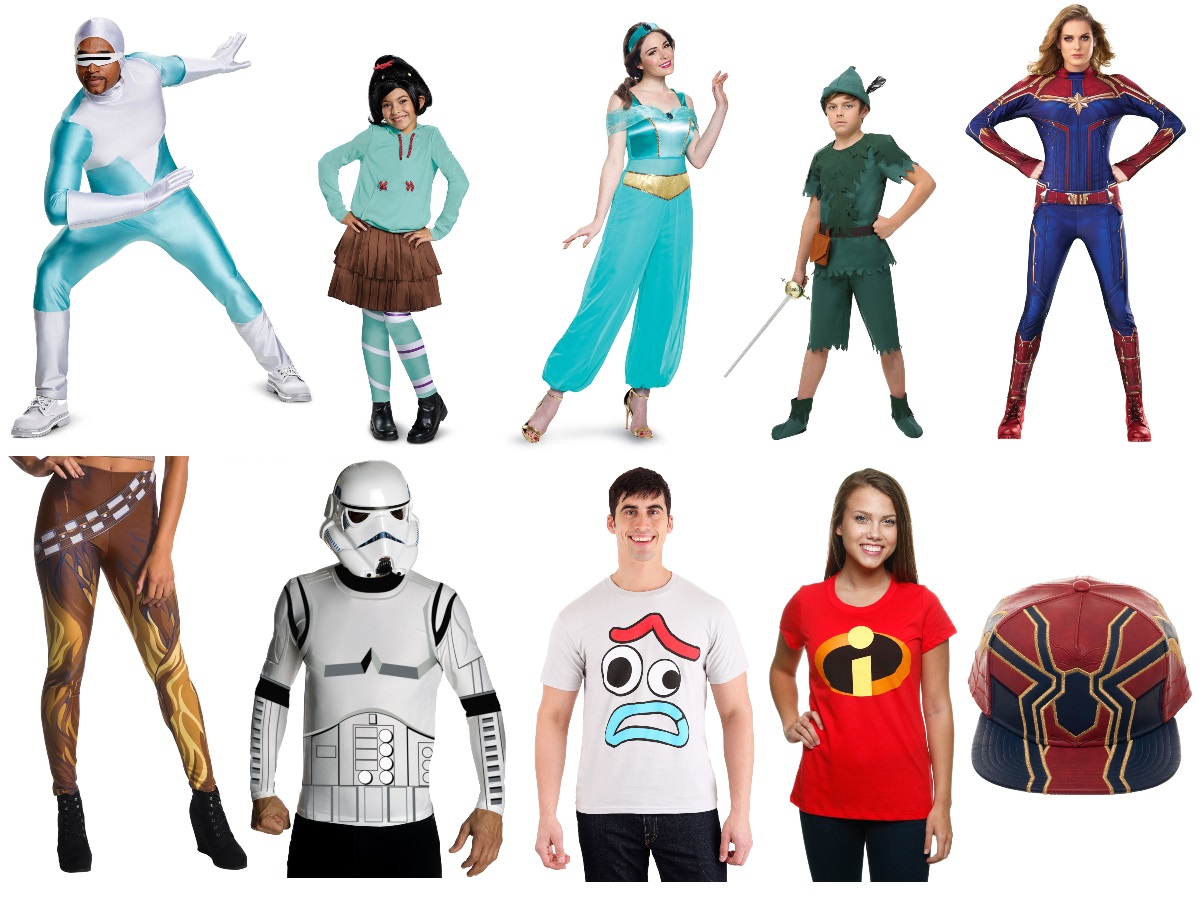 Disney fans rejoice, because there is a race that's all things Disney: RunDisney! Whether you're looking for group themed costumes for a kid's fun run, the 5K race or a marathon, we've got Disney running costumes that are perfect for any race. You may want to steer clear of the Disney Princess costumes—running in a floor-length dress certainly isn't easy—but characters like Princess Jasmine and Vanellope from Wreck-It Ralph are perfectly good options for women who want to run in a full costume. You can also never go wrong with running in superhero costumes like a Frozone costume from The Incredibles, or any Marvel Avengers costumes. Don't forget about Star Wars costumes either, seeing as they're under Disney's wing now. However, should you be on pace to run the marathon and you're looking for good marathon costumes, we have some costume apparel that might be more your pace. You'll find that we carry a variety of character leggings and shirts, and there are always plenty of accessories like hats and character socks.

The Best Costume Ideas for the CHIditarod 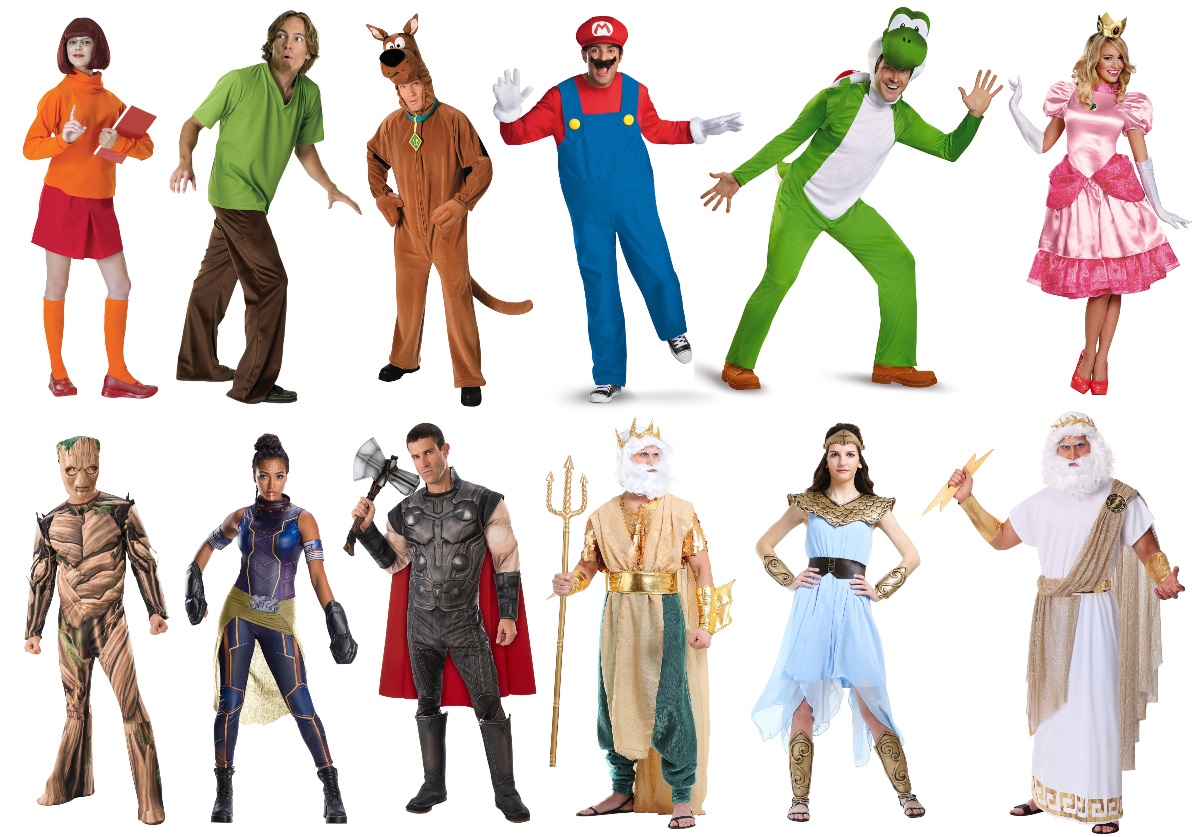 As you very well may know, the CHIditarod is not your average race. There's the extra element of a shopping cart, and you're expected to have a group of five costumes. It's also mandatory to decorate your cart, so picking a costume theme that also involves a vehicle or some other prop element for the cart is crucial! A Scooby-Doo group costume with a Mystery Machine shopping cart easily comes to mind, as does a Super Mario Bros. group with a Mario Kart-themed shopping cart. If you're willing to put in a little extra effort on your shopping cart, get a group of five Avengers costumes together and turn your shopping cart into the Helicarrier. However, don't be afraid to think outside of the box! There are tons of zany, wacky ideas waiting for you, whether you're looking at pop culture, food, animals or even history. Check out the group of Greek god costumes—you can turn the cart into Mount Olympus!

The Best White Costume Ideas for a Color Run 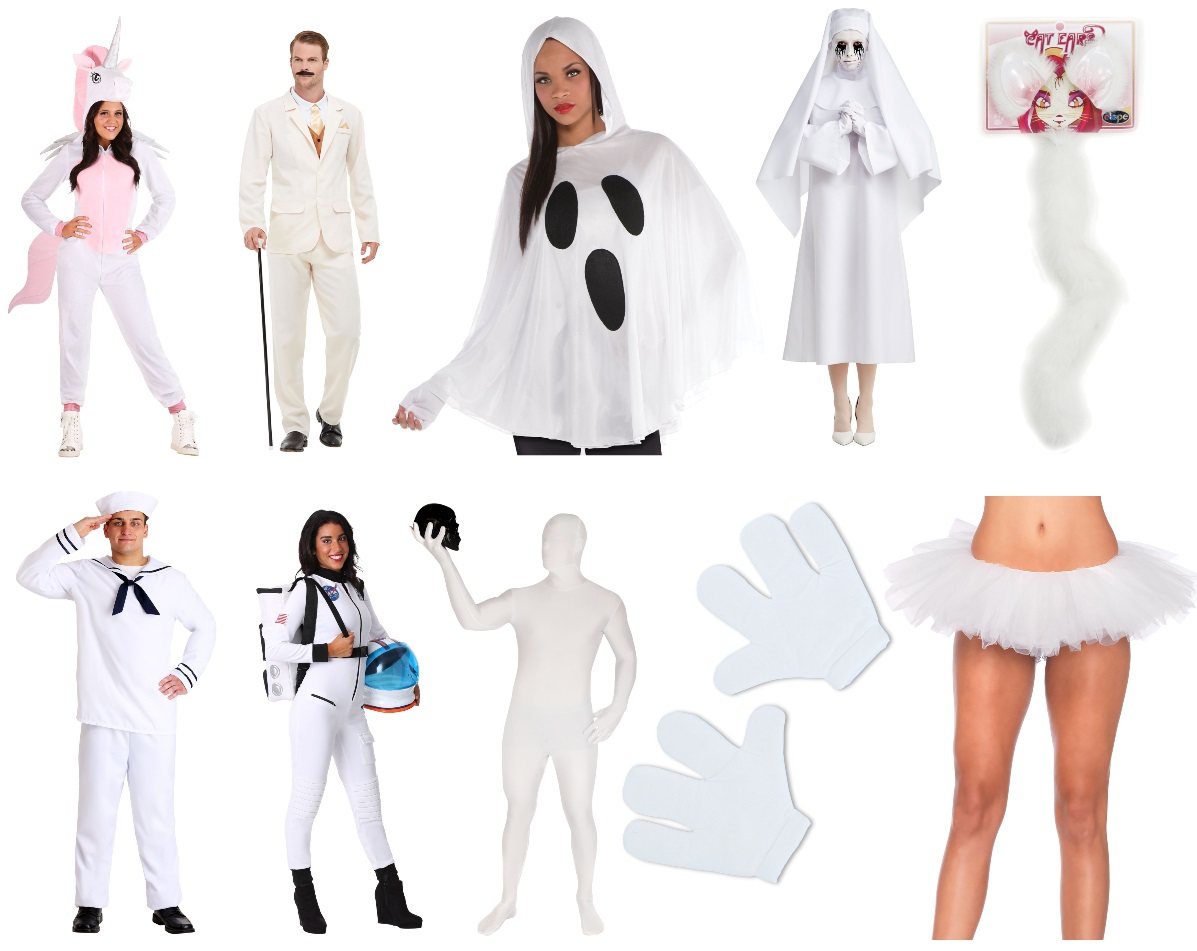 Color runs are tons of fun, and the most crucial part is that you have to wear all-white costumes or some all-white costume accessories along with your white outfit. (Don't forget to spice it up with a few colorful accents!) Typical white costume accessories include white tutus, white gloves and perhaps some white animal tails and ear sets. However, if you and your running group are looking to stand out from the crowd, we found a selection of white costumes that would be quite hilarious to see get blasted with colored powder. There are several white unicorn costumes, and it would be fun to use them again for Halloween or at a costume party after they get a tie-dye job courtesy of your color run. We also like the idea of other white costumes from Morphsuits and gangsters to astronauts and ghosts. Still, our favorite would have to be watching someone in an American Horror Story white nun costume getting pelted with pretty colors. (Seriously, take pics!)

The Best Costume Ideas for a Zombie Run 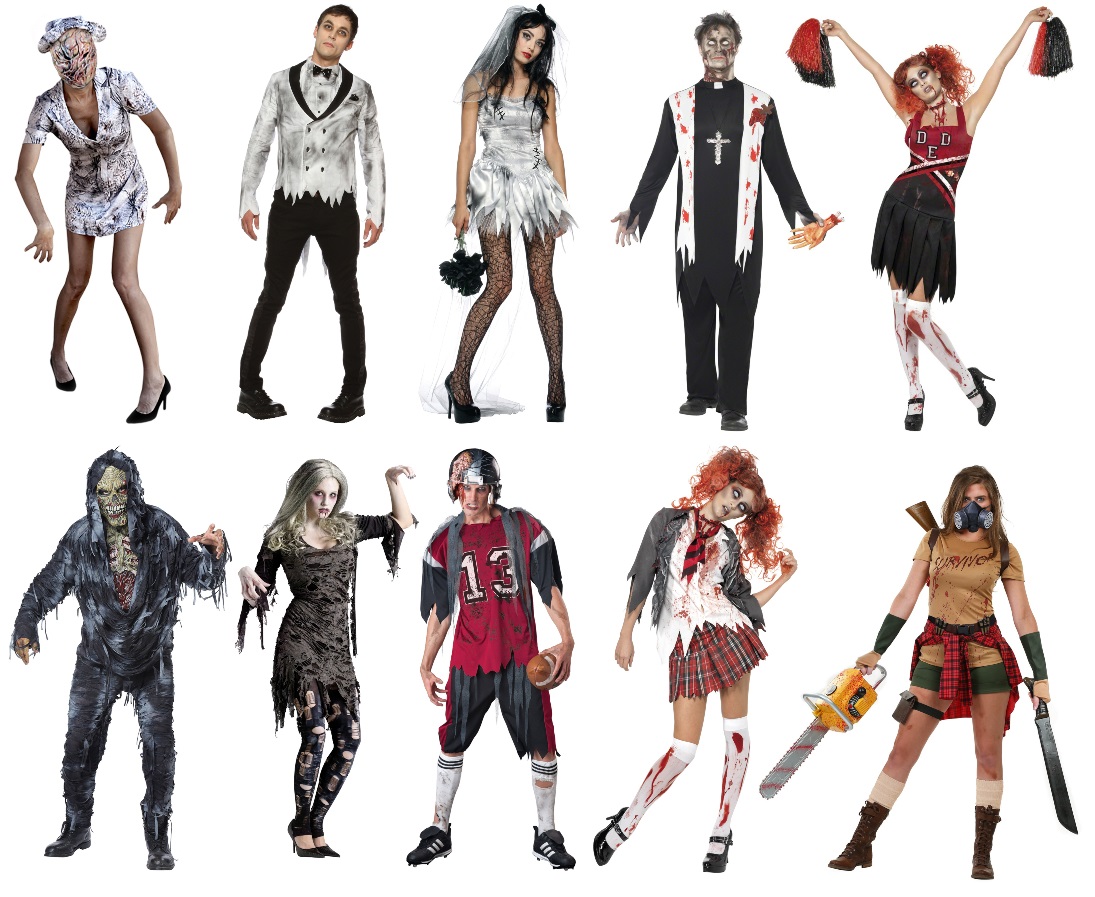 If you love running and horror movies, you would undoubtedly love taking part in a zombie run. Whether you're looking for zombie costumes for running or maybe a survivor escaping the horde of zombies, we have a variety of costumes perfect for your group. Zombie brides, zombie football players and even zombie nurse costumes are some of the easy zombie costumes that are already made for you. (You may want to leave any zombie masks at home as it's not easy to breathe in a costume mask.) However, if you like a DIY challenge, we have tons of SFX makeup to turn your running buddies into a deteriorated group of zombies. Check out our zombie costume and makeup tutorial for zombifying other costumes and clothing!

The Best Costume Ideas for a Superhero Run 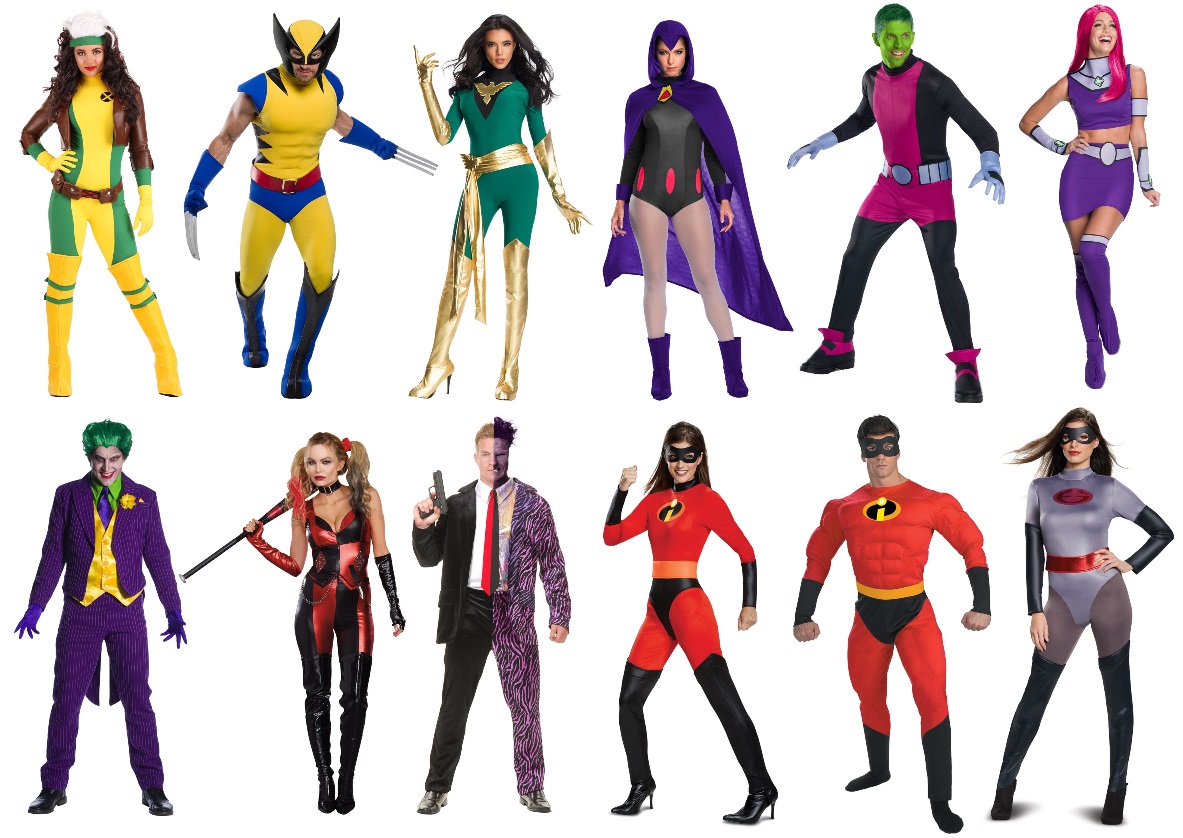 If you like to run in a group, a superhero run is a fun way to get a group costume organized! Superheroes team up all the time, so naturally there are tons of superhero groups to choose from when picking ideas for a group costume. Most superhero groups can also accommodate a group of five costumes or more. (Avengers, anyone?) If you're looking for other 5k costumes for your superhero run, you can choose from groups like the X-Men, Teen Titans, Batman and even the Incredibles. You can also choose to hang onto your running outfits to wear again at a comics convention or Halloween!

The Best Costume Ideas for a Holiday Run 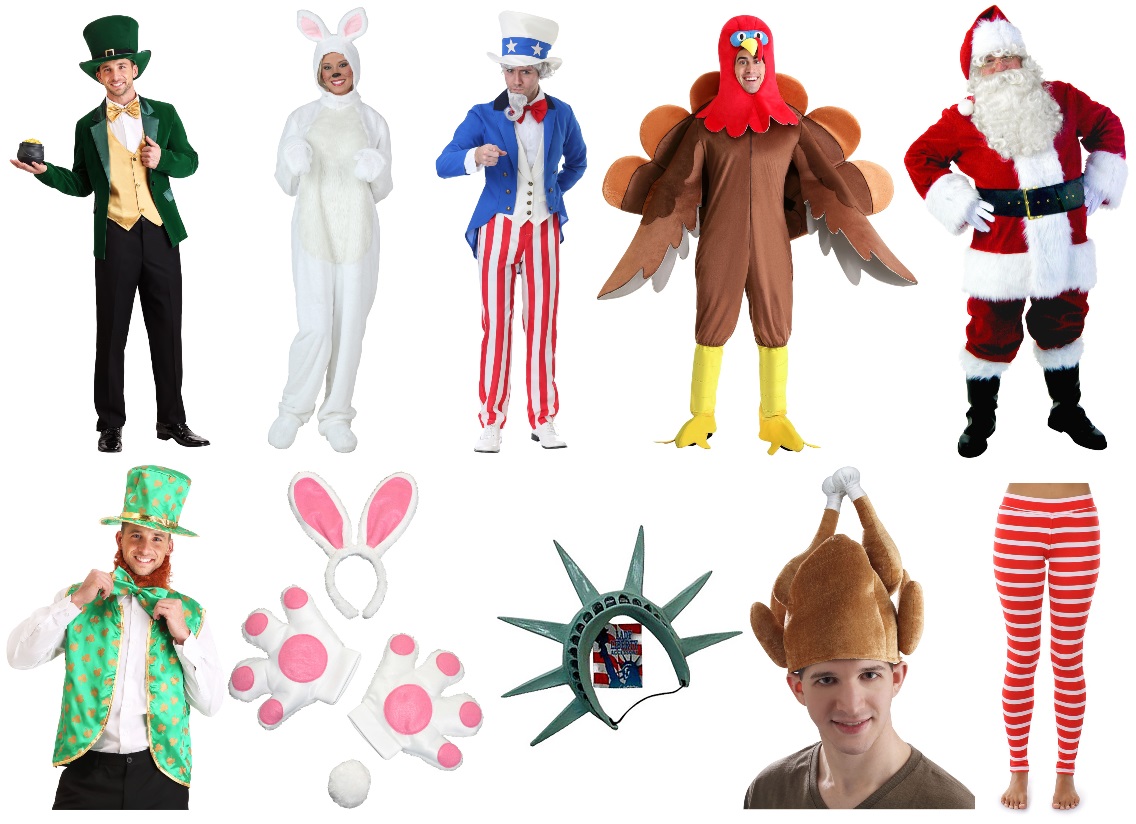 Holiday fun runs encourage running in costume to spread holiday cheer. We have lots of costume suggestions, whether you're looking for Halloween running costumes, Christmas running costumes or even Thanksgiving running costumes. The best part about running in costume for the holidays is the fact that you can wear it again at your family gathering. (Just make sure to wash it first!) Also, if you're not too keen on running in a Santa suit or a turkey costume, we have plenty of holiday accessories perfect to spice up your regular running outfit with holiday cheer.

We hope that we helped get the gears turning for your group running costume ideas. Is this your first time attending a themed costume run? How many running events do you attend every year? Do you have a favorite fun run? Please feel free to share your thoughts with us in the comments below! We'd love to hear about your own fun run shenanigans.