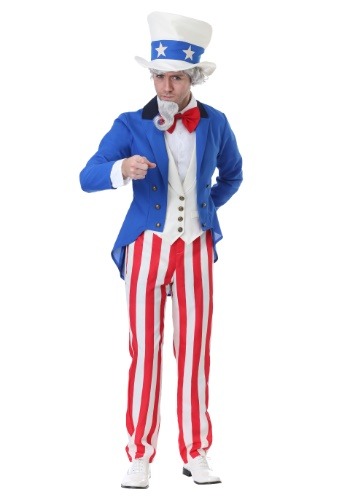 Folks periodically talk about superheroes that flaunt the red, white, and blue.  Some of them have shields and are veritable perfect beings.  Some are practically gods among men who fly around with alien superpowers or literal divine implements.  All fight for justice and honor.  But, long before those heroes were flying flag colors, there was another figure that rose up to inspire folks with the same honor, justice, and American way.

Now, official history says that a businessman donated food to the army during the War of 1812.  His uncle-like behavior and the U.S. stamps lead to Uncle Sam being the nickname of the country.  Others say that the icon of the character really only became relevant in the later 1870s and early 1900s thanks to posters and political cartoons.  But, we're pretty sure that these are all just parts of the secret identity.  We suspect Uncle Sam can do way more than just point!

Fascinate friends with the secret superpowers of the personification of the United States with this exclusive Uncle Sam Costume.  Our own designers want you to love this high-quality look of America's favorite uncle.  The full-length pants have an elastic waist and evenly spaced red and white stripes.  The navy blue jacket has large lapels and coat tails as well as an off-white vest with brass buttons.  The look wouldn't be complete without a large red bow tie and a white top hat with a royal blue, starred hat band.  Just get that pointer finger prowess down pat and you'll be Uncle Sam!

WHAT ARE YOUR POWERS?

We know that Uncle Sam has the ability to inspire pride and foster community among Americans.  But, what other powers does this enigmatic patriot have?  Only you can discover the secrets of this fatherly figure and only with this Classic Uncle Sam Costume!