Ace of Spades Costume for Adults 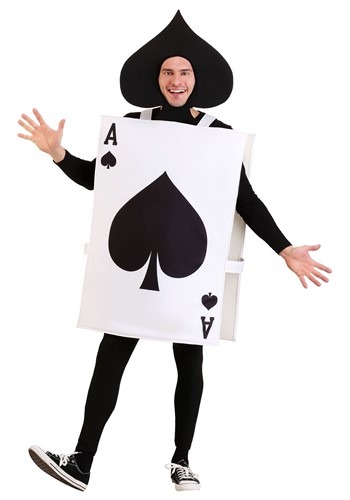 Who knew there were so many supernatural qualities associated with a deck of cards? Here we all thought we were just playing a fun little game of Go Fish and, turns out, we've been among one of the most ferocious assassins to be found in all of the world. Sure, we had heard the Ace of Spaces was considered a card of death, but who takes something like that seriously? Well, it seems like the whole world has a reason or two to do so!

Turns out that the very look of the spade calls the picture of digging graves to mind. Sure, we can kind of see that. But, turns out that early playing card decks were designed with the spade to be more like the point of a ferocious spear lance. Then, to make things even spookier, whole decks filled with nothing but aces of spades were sent all over Vietnam to scare the locals from the appearance of the Goddess of Death. Sheesh! We just thought we made a cute costume!

Whether you're looking to complete your deck or walk around as the conventionally highest scoring card in the deck... or even command the power of death as a supernaturally-empowered agent of destruction, we think you're going to have a pretty great time in this Ace of Spades costume. At first we thought our team of Wonderland aficionados had put together this high-quality jersey tunic, but now we're not certain where we came up with it! Either way, the foam backing helps to keep its firm shape. The Spade hood has similar foam structuring but fits comfortably with the same jersey material.

LEAD OF THE CARD ARMY

Whether you're the top of the house of cards, the Red Queen's favorite assassin, or a rather twisted form of supernatural doom, this Ace of Spades costume ensures that you're always the highest card on the field.