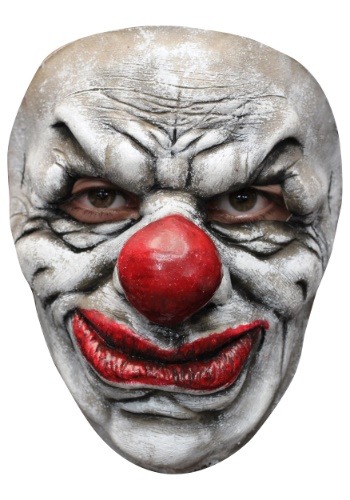 According to our research, clowns are comic performers who use slapstick or similar types of physical comedy. Apparently this fella didn’t get the memo. He’d sooner slap you upside the head with a 2-by-4 than make you smile. His idea of physical comedy involves causing traumatic bodily harm. Right before he fled the Big Top, he stabbed the bearded lady, choked a lion with a chair leg, and let a herd of elephants loose in small-town USA.

Nope, this clown does not want to paint your face, ride a unicycle, or hand you cotton candy. He would, however, love to creep around the edge of town, follow you around at a distance while you do your errands, and chase you with a sharp object! But it’s all in good fun. You could put up posters letting everyone know that Adult Clown #2 and his posse are into some gruesome past-times, or you could just wear this mask. They’ll probably get the picture.

This clown isn’t insane––he’s adult. Level-headed. He’s got a mortgage. That doesn’t mean he’s not malevolent––twisted, evil, call it what you want. But he’s perfectly sane. You seriously don’t think the circus does a psychological evaluation before they let strange drifters touch your children’s faces? Give us a break, there’s no way they could get away with that! Unlike most jobs these days, the clown union has very good mental health benefits. So, no, Adult Clown #2 isn’t crazy. He’s adult. In all meanings of the word. Like, the meaning where his face is the size of an adult’s face so it wouldn’t fit on a child’s face, mainly, but also, like, R-rated stuff or whatever.