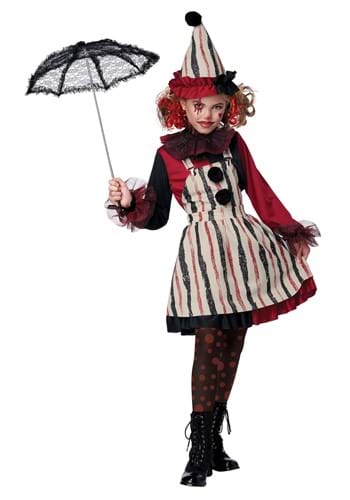 A Lot of Clown-t at Court

Oddly enough, one of the most important people in the Middle Ages was the court jester. This person was not only genuinely hilarious, but they also had the opportunity to regularly speak to the king, which most other courtiers could only dream of. That is the kind of power that a jester could get used to and use to gain wealth for themselves, or, if they were the scary kind of jester, to cause spooky mischief.

That is what makes style choices so important for anyone who wants to pursue that kind of career at court. If you dress in a neutral way, no one will ever know where you stand and you won’t be as successful. So, it is important for every court jester to display their ethos and personality on their sleeve, whether they want to be good or bad.

That is where this Girl’s Clever Clown Child Costume excels! It has all the hallmarks of a smart and slightly wicked jester, while still being stylish and chic. The overall style dress and poofy-cuffed shirt place it well into the quirky jester category, while the dark colors declare it to be quite spooky. The matching hat and frilly neck add that extra little bit of comically scary feeling that will set you apart from the other wannabe clowns!

If you are looking for that perfect clown costume that will make people think that you are very frightening indeed, then this is the costume for you! Your jokes will all land, since everyone will be laughing in nervous fear around you anyway!