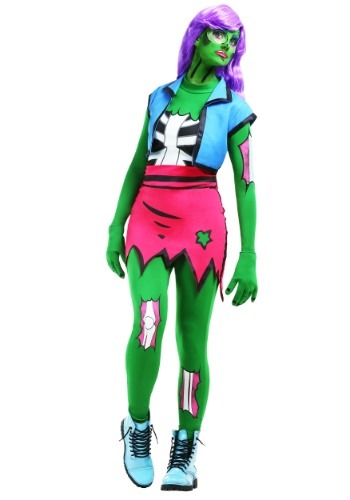 With all the zombies in the media, you were prepared for the fallout. Everything happened as you thought it would. There were fires in the streets, cities full of soldiers and tanks, and people fleeing in droves. You didn't think you'd become a victim you had your bases covered but you made one big mistake, you didn't properly tie your shoe laces before leaving the house.

It's not fair, we agree. You just bent down to tie your shoe for a second before receiving that first fatal bite. Unlike that zombie video game you used to play, this time you didn't get to start over. So, yeah, you didn't think you'd end up like this but your future as a zombie is surprisingly bright. For one, you're glad you wore your cute skirt and vest for the apocalypse. It would be a shame to be stuck wandering the earth in some muumuu. Two, your skin has taken on a fresh, dare we say, couture sheen. If biting people uncontrollably wasn't frowned upon at the Guggenheim, you'd be their new figurehead with your fresh new look. Actually, you should go check it out, New York is a great place for a chic, culturally relevant zombie.

An outsider might say that you are more mod than in you were in life, that's fair. It's also fair if you go for their brains as they're critiquing your former look. Somehow dying has given you a new lease on life. Your bones might be showing but you've got more guts than you ever did in life. You do look good but if you do get a do over, wear Hook and Loop fastener shoes!