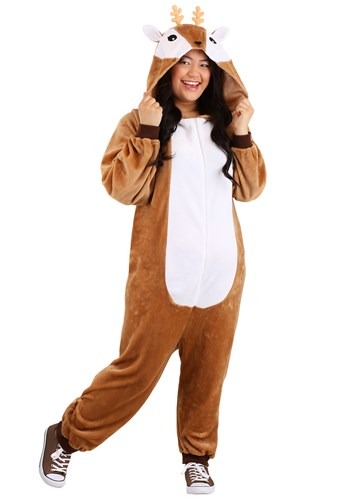 A CREATURE OF MYTHOLOGY

You've seen a deer before. Of course, you have. They're adorable. They're cuddly. At least they look cuddly. Since they tend to bound away before you can get a good snuggle in, it's really just speculation. A myth, if you will. It calls to mind the other myths of these curious and fantastic critters. At first, we wondered if they were similar to the Faun. After all, a baby deer's name sounds pretty similar! But, a half-goat creature with manly features and a gruff attitude doesn't quite strike the curious and elusive nature of the deer!

That's when we discovered the Golden Hind! Picture this: a lovely deer with feminine features, a hide of golden brown, near-mystical hair. Sometimes they are even depicted like a centaur but half-deer and half-woman! The best part of the Golden Hind is that they also get antlers! No longer are the grand looks of the stag restricted just to the dudes! It is time that everyone gets a glorious crown!

Feel more comfortable than you thought was naturally possible and cute to boot with this Fawn Deer costume. This pajama-style jumpsuit is a Made By Us look that was put together by our team of in-house designers. They wanted to make sure that you would feel like you stepped right out of a dream, so the soft fabric is snuggly and it is decorated with the white spots of a baby deer. The hood pulls up to reveal a fawn-like face and little antler stubs, proving this is definitely a mystical critter!

Not only is the fawn a delightful creature that brings a smile to everyone's face but when you're in this costume, you'll feel like the Golden Hind, the favored creature of the Goddess of the Hunt. Who can deny a fate like that!?