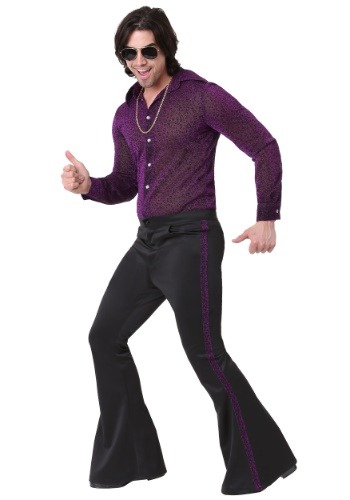 You missed it. The 70s came and went. The disco balls are all stashed away in storage. Lipps Inc. packed it up after "Funkytown". Everyone stopped wearing bell bottoms and there are far fewer afros going on. People rarely do the hustle anymore.  These days it’s about the Nae Nae. You could just let disco be done. You could just go on your way and pretend like it never happened, but that’s not the kind of person you are, is it?

You’re ready to revitalize the disco scene. You’re itching to show people how to do The Bump, once again. You’re ready for a pair of bell bottoms, a funky tune playing, and the opportunity to be crowned king of disco. Yes, you are ready to become one dazzling disco dude!

Don’t be a disco dud. Be a disco dude with this exclusive disco costume for men. The outfit comes with a vibrant purple shirt that buttons up the front. And don’t worry, because the collar can be popped, for maximum disco action. The costume doesn’t stop there. It comes with a pair of bell-bottom pants that will rock your world. They’re black, but the feature a purple stripe along the side of each leg. When you cut a rug, you all eyes will big on you and your flashy purple self!

Now, don’t go thinking that you can claim the title of Disco King just by putting this disco dude costume. You’re going to need to practice your dance moves. You’re going to need to make the perfect 70’s playlist. You might need a pair of sunglasses and a gold chain to round out your look too, so be sure to check out some of our disco accessories to finish off your look!