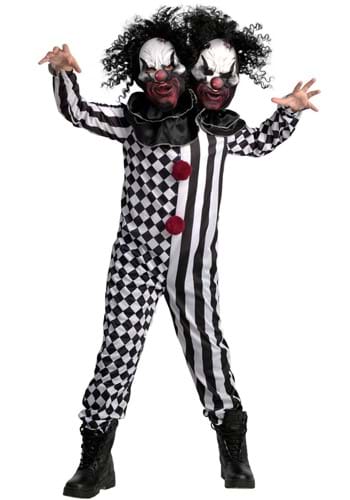 Are We Seeing Double?

Alright, tell us- What is scarier than a gruesome clown running at you in the dark while yelling a blood curdling laugh? That's right, giant spiders! Oh, you thought we were going to say a gruesome clown with two heads running at you in the dark while yelling twice as many blood curdling laughs? Well, now that we're both thinking it, yeah that is much scarier! Get your child into the frightful spirit and have a laugh while doing it with the Kid's Two-Headed Clown Costume. The scares come in a double dose for twice the fright!

This costume is set to scare anyone who happens to pass by, and then get scared again when they see it at another angle! The set of masks are identical, with one resting off to the side on the shoulder, and the other going around the real face. The jumpsuit is half checkered and half striped, with the sleeves inverted, which gives off a unsettling tone. The red pom-pom buttons look soft to squeeze, but we aren't sure if we would want to get that close to try!

Two Heads are Better than One

Have a laugh and then do it again with twice the amount of grins. Your child will love scaring on the left, and then frightening on the right while having a partner built right in! There's may not be an "I" in "team" but there are 4 eyes with this two headed clown!