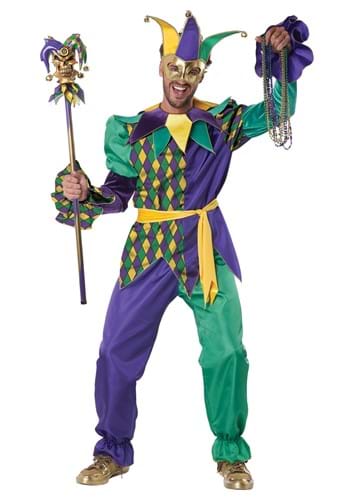 Bring on the Clowns!

Normally, dressing up as a clown makes people think that you've run away from the circus or you're a pathological maniac who's probably going to get stabby in a small Maine town. Actually, when they were first invented, clowns were definitely the life of any party. Back in the day, clowns, or jesters as they were first called, were the original stand-up comedians. They were the cool people who could make fun of a king to his face without getting their heads chopped off (most of the time, anyway.) And nowadays, if you dress up as a jester around Mardi Gras, people automatically assume that you're going to be passing out beads and making everyone's holiday even more colorful! That's a lot more fun than terrorizing Derry.

Become the ultimate party animal in this Deluxe Mardi Gras Jester Men's Costume! You'll be as colorful as a parade float in the polyester tunic top with its ruffled cuffs, and wild mix of purple, green and gold patterns. A stretchy velvet sash loops around your waist and a tie-on oversized collar gives the top even more pizzazz. The included pants have one purple and one green leg. The elastic in the waistband and cuffs makes them comfortable as well as colorful. Thanks to the wire in its frame, the gold mask can be molded to fit your face, while the multi-colored jester hat with its jingling golden bells lets everyone know that you know how to have fun!

Eat king cake, throw beads, and celebrate the beginning of spring! It's always a good time when you're being your jester alter ego.