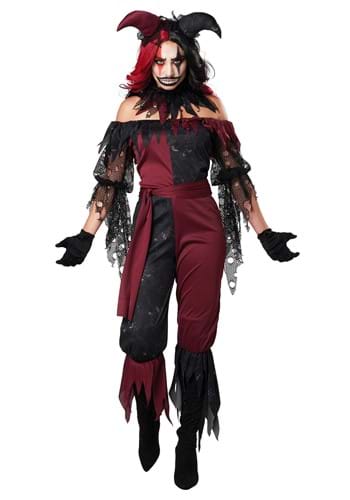 For My Next Trick...

We think of jesters as simple court clowns. The thing is, they were a lot more. Not only were many of them talented songwriters, musicians, and contortionists, some of them were so close to kings or queens that they were expected to ride into battle and act as messengers for the warring armies. There's even a story of a dwarf jester that escorted a queen from Holland to England, using his horsemanship and soldiering skills to keep her safe through enemy territory. Though the Medieval world might not have been kind to jesters, there are many who have gone down in history, one performer even has a forest in England named after him. You see, whether you specialize in acrobats or archery, you can do what you want as a jester, as long as you do it with style!

This dark jester costume will keep the court on their toes! The featured jumper has a classic checkerboard pattern. The waist is tied with a matching sash to keep this look flattering. Tattered for a nightmarish look, the off-shoulder balloon sleeves and trimmed with classic tatters. Matching the jumpsuit, the tattered collar and the headdress finish this jester costume with a dramatic flourish!

Here We are Now

Entertain us! Are you heading out to a Medieval themed event or Halloween party? This jester costume is sure to make you feel like you have the entertainment of the court in the palm of your hands. Customize this look with dramatic makeup like the classic diamond eyes and the wide smile pictured or a show-stopping wig that'll make you ready for the spotlight. Just make sure you make it clear whether you're down with going into battle with your employer. We'd say that's a healthy boundary to draw!