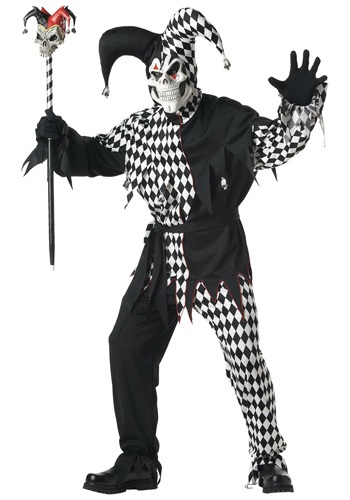 The king or queen may be the one with all the actual power to govern. But behind the scenes, it’s usually the jester who’s really pulling the strings! So if you’ve got big plans but aren’t in any rush to take on the responsibility of real rule, you might want to consider brushing up on your knock-knock jokes and putting on this sinister Dark Jester Costume!

Sure, the chump on the throne may be little more than your puppet. But it’s going to be hard to enact your diabolical agenda if anyone notices that you’re not the jovial joker that you pretend to be. And we’re not saying you have to become a master of stand-up or anything, but you’ve got to keep everybody chuckling if you want to distract them from your true purpose!

Otherwise, you might be the one who winds up in stitches. After all, most people aren’t fond of being fooled by the fool! But if you manage to convince them that the surly sneer of your skull mask is really just a playful grin, you’ll always be able to snatch as much power as you crave!

This hypnotic checkered costume set has everything you need to play the part of court jester, with details that can seem cheerful or macabre depending on the light. And since you seem to favor the shadows, we suspect that the decor of the royal palace is about to get a nefarious twist!