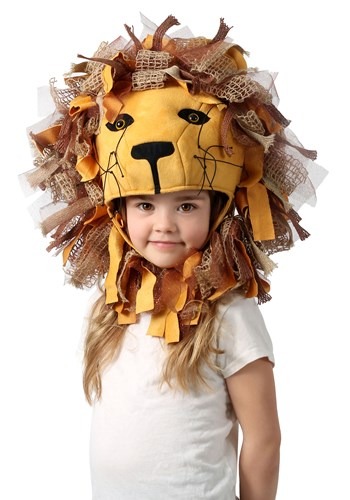 If there is one thing that proves that Luna Lovegood is the best wizard of all, it is the fact that she's there for everyone, no matter what their house may be. She's certainly Ravenclaw, through and through, but that wise wizard isn't just going for blue and bronze pride no matter the cost.

She knows who her friends truly are and she's out there fighting the good fight! Of course, when it comes to Quidditch, everyone knows that you've got to give your all! (As if Luna would ever give less than everything.) Naturally, that means when it comes time to cheer, she's ready to belt out a roar in true Lovegood style.

Make sure that the whole world knows that your kiddo is all in on Quidditch and Harry Potter fun with this officially licensed Roaring Lion Hood. This adorable hat is inspired by the headwear that Luna wears in the books and films to support Gryffindor (especially when playing against Slytherin). It has a homemade quality and also avoided any lion teeth, so it is certain to be a cute accessory that won't actually be eating your kiddo's head!

You'll have to supply your own "ludicrous lion hat roar" when wearing this adorable Luna Lovegood Lion Hat... at least until you figure out the wand wave Luna used!