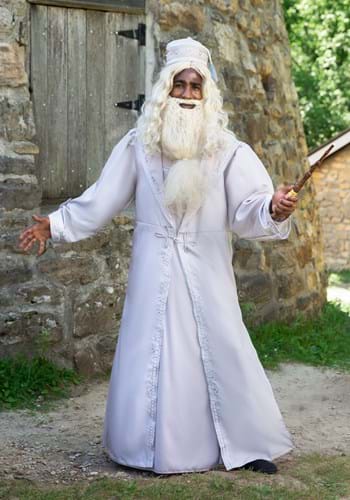 The Mystery of Dumbledore

No matter how much time you spend pouring over the lore of the Wizarding World, it is pretty certain that you won't ever uncover all the secrets that have been hiding under Dumbledore's hat. Some wonder if he might have been the original Death, waiting at the Crossroads. Others suspect that maybe he had something in common with his friend, the phoenix. Many aren't sure that he had any huge conspiracy up his sleeve, but they are sure he had more things hidden than anything he ever shared!

Whether you think Albus Dumbledore was one to keep things hidden or share his stuff, there is one little bit of non-canon lore that's always fun to play with. In the films, Dumbledore looked one way at the beginning and changed his shape as the years went by. Muggles might say that he had to be recast but others wonder if this is just more of Dumbledore's skulduggery!

Whether you wonder if Dumbledore was swapping shapes or if you just enjoy his magical mischief, we suspect you're going to love transforming into the mighty wizard himself with this officially licensed Deluxe Albus Dumbledore costume. Our Made by Us team devoted their time to bringing this Headmaster of Hogwarts to life in the form of a grand tunic and a matching jacket and hat. Each piece has silver trim made of cord and the hat features a foam back to maintain its shape as well as a dangling tassel for those extra moments of wizardry. Faithfully recreating the first Dumbledore, you're ready for the Hogwarts Hall of Fame.

It isn't that uncommon for wizards to go shifting their shapes. Who is to say that when you step into this Deluxe Dumbeldore costume that you aren't the genuine article living out another life!? Discover the secrets of the Wizarding World as one of the most powerful ones ever seen!