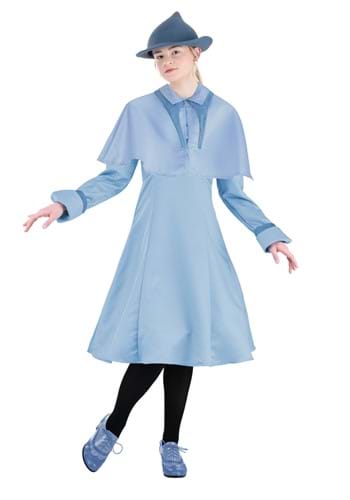 Popular! 2 have looked this recently.

Hogwarts, Hogwarts, Hogwarts. All anyone ever talks about it Hogwarts! But there are schools of witchcraft and wizardry all over the world, as we learned in The Goblet of Fire, and they turn out some fine magical folks, too. So if you're looking for an experience abroad in the magical world, why not check out Beauxbatons, home to the stunning Fleur Delacour?

Fleur is so lovely, so smart, and—as proved in the Battle of Hogwarts—so brave, that anyone would be lucky to walk in her shoes. Now, you can, thanks to this exclusive Women's Deluxe Fleur Delacour Costume! It creates such a magical transformation, it will look like you took a swig of Polyjuice potion just before Halloween.

Our design team may have gotten a smidge of magical help from the wizarding world to get this costume just right — but just right it is! It mimics Fleur's Beauxbatons uniform, with a periwinkle blue satin dress and coordinated cape, as well as Fleur's signature hat. Dark blue accents and decorative buttons help this costume look impeccable. Pair it with blue wingtips or other lace-ups and the wand that chose you!

As if you needed more incentive, Beauxbatons has been described as a palace-like chateau set in the French Pyrenees, with breathtaking views. The food is delicious, students are serenaded while they eat by majestic choirs of wood nymphs, and at Christmas, the main hall is adorned with great, non-melting ice sculptures. So, uh, yeah, sign us up!